Devoid of confidence, the 38-year-old had dropped out of the top 50 players in the world rankings for the first time in 10 years – and admitted he was in a slump. 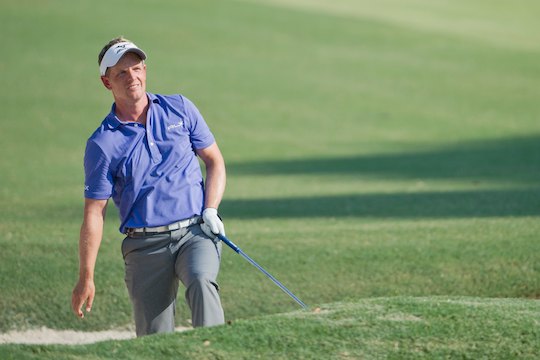 Just three and a half years ago he was ranked the No 1 player in the world and sat atop the prizemoney lists on both the European and US Tours.

A change of coach and a sagging confidence saw Donald miss the spot he wanted the most – a position in the European Ryder Cup team in 2014.

“My confidence had taken a big knock and I asked myself if I wanted to continue doing this,” Donald told a London newspaper.

“I wasn’t enjoying it, [I was] finding it so hard and could not see much light at the end of the tunnel.

“But then I told myself not to be a baby, to grow up and realize how lucky I was…I was still playing golf for a living.”

Regarded as one of the best iron players in the game when at his peak, Donald knuckled down and went to work on his game with long-time mentor Pat Goss late in 2014.

He also sought help from sports psychologist Michael Gervais, who reminded him that it was up to him what mood or mindset he was to be in.

“When you’re in a slump it’s easy to forget you’re still the one who is in control,” said Donald, who has banked more than $US50.81m in his career.

Now ranked 78th in the world, Donald’s immediate goal is to get back into the top 50 or win on the PGA Tour to qualify for a 12th consecutive US Masters appearance in April.

“I think I have a little way to go, but I’m feeling confident that I can get back to at least close to a level I was a few years ago,” he said.