This is after Rickie Fowler posted a score of 94 and good friend Justin Thomas failed to break 100. 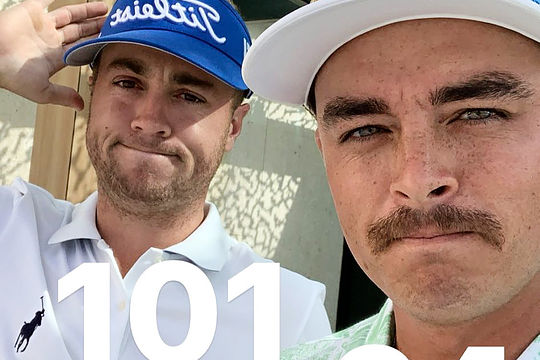 On Sunday, Fowler ‘smacked’ Thomas by five shots in shooting a round of 60 at Jupiter in Florida and then on Wednesday Fowler posted a video of a shirtless and shoeless Thomas playing a shot from a muddy water hazard.

Then on Thursday, Golf.com first reported the pair held a “Lefty Championship” after sharing the experience on an Instagram story.

It didn’t take Thomas long to get frustrated playing ‘cack-handed’ after hurling a club and Fowler commenting: “Big fine coming for the club throw.”

Fowler also joked about one shot that Thomas sailed out-of-bounds, calling it “Oscar Bravo,” and said of one of his playing partner’s shots into the water: “JT’s over there getting the SCUBA gear out.”

Fowler later landed a 160-foot shot out of a sand trap onto the 14th green and Thomas remarked, “That’s just not at all what I needed. Probably the best shot of your life. That is dumb.”

At the end, Fowler posted a picture of the two with the scores, while Thomas assessed the damage.

A day later and former World No.1 Brooks Koepka flexed his amazing lefty skills, posting a pair of videos taken by his coach, Claude Harmon III.

Koepka proceeded turn over an 8-iron and smack it nearly 180 metres followed by a drive of almost 280 metres and clearly putting to shame both Fowler and Thomas in the process.

Maybe we will see more of this over the coming months with the world’s professional golfers looking for anything to do to reduce the “Cabin fever”.