With the 2011 season European Tour player Frances Bondad has endured, only her nearest and dearest would have believed she was capable of winning a tournament.

Dumped by long-time sponsor Nike and with no Top 10 finishes on the European season all year, put simply, she was struggling. 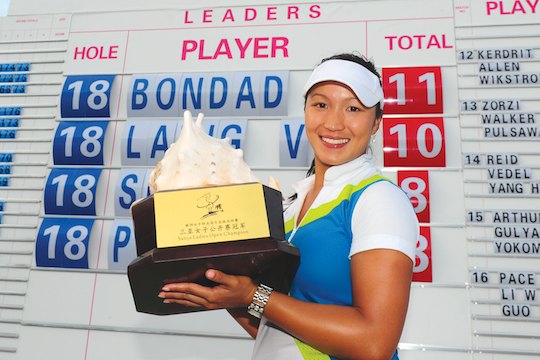 Then came her breakthrough maiden European Tour win at the October Sanya Ladies Open in China.

Finally Bondad had reason to smile, but before China 2011 was a horrible year for the Sydneysider.

Even winning a nice sporty BMW in June for a hole in one didn’t do much to raise the 23-year-old’s spirits.

“My year before the win was frustrating,” she said.

“Even when I won the car, I felt lost, confused and abandoned.

“It was a terrible time, to the point when I asked myself if I should just work in a shop fulltime in 2012, just to fund my expenses for the next year. ”

But as anyone who knows the former No.1 Australian amateur will tell you, she just keeps plugging away, believing one day her time will come.

“Even during the toughest times, I always believed I could win,” she said.

“I’ve had eight Top 10s in the past three years, including some Top 5s, and have been in contention and in the final group a few times, so I did feel a win would come soon.”

Her self belief, plus a trip to a hypnotherapist, finally hit paydirt for Bondad when she was able to hold off Scotland’s Vikki Laing to secure her first European Tour victory.

“I felt really happy and surprised, because I wasn’t expecting it. I had already accepted it was Vikki’s day. But in a way, I just felt normal. I didn’t feel I had just won a tournament,” she said.

“Having hypno-kinesiology treatment two weeks before helped me with my belief and my confidence.”

The win has secured Bondad’s card for the next three years on the Ladies European Tour and she now heads into the upcoming Australian season with renewed confidence.

On Bondad’s target list is the NSW Open, which tees off from January 27 at the Oatlands Golf Club in Sydney’s west.

“I’d like to win any title, but the NSW Open would be nice because it’s my home state and I know lots of my friends will be watching,” she said.

“Oatlands is quite short but narrow. Keeping it on the fairway, hitting the greens, especially the par 5s in two, and holing a lot of putts, should put you in a pretty good position to win.”

Also on her list is the Australian Open, which will boast one of its strongest fields thanks to its co-sanctioning status with the USLPGA.

“I’m looking forward to the Australian Open. It was always been my favourite tournament,” she said.

As for the car, Bondad takes ownership of the BMW 640i convertible soon but she won’t own it for long.

It’s worth around $140,000 but Bondad plans to sell it. After such a trying season with the finances, one could hardly blame her.