He’s dealt with a lot over the past few years. So turning 50 last week was the least of John Senden’s worries as moves into a new phase of what has been a very successful career for the Brisbane-born, Texas-based quinquagenarian.

Senden will join fellow Queenslander and good friend, Rod Pampling, as he tees off for the first time in a Champions Tour event at this week’s $2,250,000 Insperity Invitational in Houston, Texas. 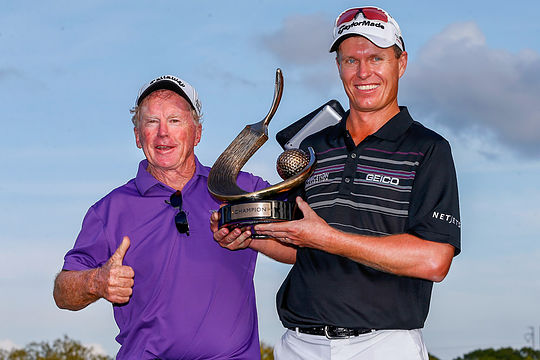 The tour veteran had his life turned upside-down just ahead of the 2017 Zurich Classic when his only child, Jacob, who was then 13-years-old, was diagnosed with a brain tumour.

“Earlier this week I withdrew from the Zurich Classic of New Orleans to be with my wife Jackie and son Jacob while he battles some health issues,” said Senden at the time. “Our son is undertaking the biggest challenge of his life thus far having been diagnosed with a brain tumour.”

He made the understandable decision later that week to take a break from golf to focus on the health of his son.

Senden, who has earned close to US$22 million on the PGA Tour, was able to play the next two seasons under a Major Medical Extension before being forced into the Past Champions Category when he was unable to meet the required criteria. He is playing the 2020-21 season thanks to a “300 PGA Tour career cuts made” exemption.

And four years on from Jacob’s life-threatening diagnosis, Senden is cautiously optimistic about the future.

“Back in 2017, it was pretty rough. He was on the edge then. It was challenging because for one, I didn’t even know whether I was going to continue to play the game, with trying to take care of Jacob, in hospitals, getting him healthy again,” Senden told www.pga.org.au

“But he’s way better now. If you saw him today, you wouldn’t know he was really, really sick at all.”

With life almost back to normal, the two-time PGA Tour winner is hopeful that a consistent schedule on the Champions Tour will see him returning to the type of consistency that saw him average well over a US$1.5 million per season between 2006 and 2017.

“I feel really good about turning 50 because it’s going to give me another chance to play a consistent schedule and stay healthy.”

“Last year, with COVID, I only played about eight events. This year, I’m going to play probably 20-25. That’s something that I’m looking forward to.”