Sergio Garcia is expecting one more supporter in the gallery when he returns to defend his US Masters title in 2018…a son or daughter.

The most exciting year of Garcia’s life has gone to the next level with his announcement last week that his new wife Angela Akins Garcia was expecting their first child in March. 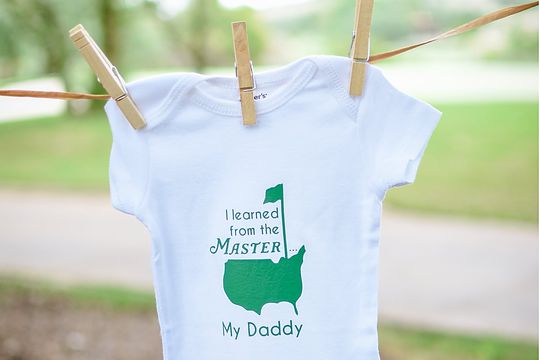 It simply caps off the most amazing year in Sergio’s life…one that saw him win his first major championship, get married and now announce that a baby was also on its way.

Not bad for a player that probably entered 2017 carrying that unwanted ‘tag’ of being the best player never to have won a major championship.

His Masters win was one for the ages.

His marriage to Angela Akins in July made the Spaniard happier than he’s ever been.

Now it seems the pair are ready for the next stage in their lives and the baby should be born before Sergio hits Augusta National to defend his Masters title.

Garcia revealed his latest exciting news via his social media channels, posting a photo of a baby onesie with the words ‘I learned from the Master…my Daddy’ written on the front of it, including the green Augusta National logo.

Among the first to send a reply congratulating him were Tommy Fleetwood, whose wife also gave birth a few weeks ago.

No doubt the name Seve, after Sergio’s idol, the late Seve Ballesteros, will be mentioned as a possible name for the new baby – if it’s a boy.

And in other big news from the Sergio camp, the popular 37-year-old has also revealed he is parting ways with TaylorMade, ending a 15-year partnership with the leading golf club manufacturer.

While he is yet to reveal what clubs he will be playing in the future, Garcia was photographed testing Callaway’s Mack Daddy wedges and an Odyssey Toulon putter at the recent British Masters, although nothing has been announced yet.