During the evening Garcia had been invited onto the stage, where he was interviewed by the Golf Channel’s, Steve Sands. 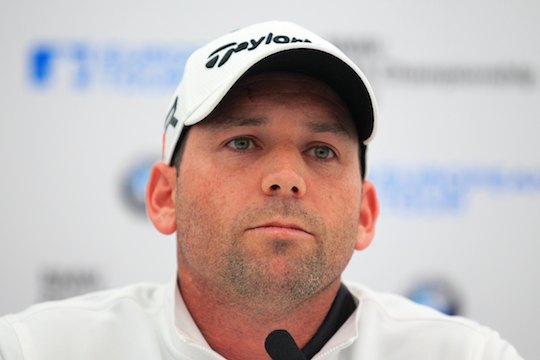 Sergio Garcia speaks to the assembled media about his comments made at the European Tour players dinner (Credit: Fran Caffrey/www.golffile.ie)

It was hours after Garcia had been in attendance at the Media Centre at the Wentworth Club and venue for this week’s flagship BMW PGA Championship.

Garcia indicated he wanted to ‘move on’ following an incident involving he and Woods during last fortnight’s Players Championship.

However when Sands asked Garcia if he would have the 14-time Major winner around for dinner during the up-coming US Open, Garcia shocked Tour officials and guests responding: “We will have him around every night. We will serve fried chicken.”

Garcia’s remarks immediately rekindled remarks made by American Fuzzy Zoeller immediately at Woods had the 1997 Masters, and his first Major by an amazing 12 shots.

But just moments before Garcia was to attend a 2.15pm (UK time) press conference at Wentworth, Woods tweeted the following message: “The comment that was made wasn’t silly. It was wrong, hurtful and clearly inappropriate.”

Garcia admitted he didn’t have Woods’ mobile phone number and instead phoned his agent, Mark Steinberg but after being able to contact Steinberg, Garcia left a message of apology on his phone.

Garcia than attended the BMW PGA Championship Media Centre for a second time this week, and on this occasion accompanied by one of the Tour’s leading press officers.

“Well, to be honest I have a couple of things to start with. I want to send an unreserved apology as I did not want to offend anyone,” said Garica,

“I was caught off guard by the question last night but I understand my answer was totally stupid and out of place, and I can say sorry enough about that.

“Also I want to say sorry to the European Tour and my Ryder Cup teammates who were there last night for taking the shine away form a wonderful dinner, a wonderful Players Award dinner that we all thoroughly enjoyed.

“And finally and most importantly I want to apologise to Tiger and to anybody I could have offended by the comment I made and just say I feel sick about it and I feel truly, truly sorry.

“I just hope we can settle things down and move on!

“I tried to contact Tiger but not having his number I contacted Mark Steinberg saying how sorry I was and that I would love to talk to Tiger as soon as possible and make sure everything is okay, and that honestly it was a bad comment that should not have been said.”

Garcia was asked if as a result of his comment and his desire to apologise to the 14-time Major winning Woods that his long-time frosty relationship with the current World No. 1 could, in fact improve.

“Hopefully that may happen but like I said before, I am terribly sorry for what happened and I am sure we can talk soon and I can apologise to him face-to-face, and move forward and forget about the whole thing.” said Garcia.

However Garcia denied his response to Sands had purposely been a racist comment.

“No, it wasn’t meant that way and I was just caught off guard and what seemed to be a funny question I tried to answer with a funny reply,” added Garcia.

“It came out the wrong answer.”

“I was very hard for me last night and soon as I left the diner I started to get a sick feeling in my body. I didn’t sleep at all last night. I felt like my heart was going to come out of my body. I felt bad and sick about all day.”

“Unfortunately I said it and the only thing I can do is say sorry.”

And when reminded of the backlash Fuzzy Zoeller faced following his 1997 Masters comments, Garcia is hopeful there will be no similar backlash when he returns to the US to compete again on the PGA Tour.

“I did not know about Fuzzy’s comments but then I was told about them today and in 1997 I was only 17 at the time but like I have said, I am terribly sorry and I didn’t want to mean it that way and I hope we can move on and enjoy this week and concentrate on this wonderful tournament.”

“I don’t know if there will a backlash but that doesn’t depend on me.”

George O’Grady, CEO on the European Tour and Finchem, as head of the PGA Tour, have discussed whether Garcia will be fined and or suspended over the remarks as Finchem was also a guest at the dinner.

However Garcia is confident there will be no such action by either to either fine and or suspend the 33-year old even though the matter could still be placed before the respective players representative committee’s.

“So I am very thankful they were there this morning to help and they both accepted my apology, and they were fine with that.”

And Garcia indicated lastly he will take his place in the European Tour flagship event and tee up Thursday at 12.50pm local UK time alongside fellow Spaniard Gonzalo Fernando-Castano and Ryder Cup winning colleague, Luke Donald.

“If you had of asked me this morning I might have said I was going to withdraw and while my mind may not be in the greatest place at the moment, I feel like the tournament deserves to have me,” said Garcia.

“What I said has nothing to do with the tournament and it was all about me, so I want to go out there tomorrow and try to give it all I have and try to do well and have people watch me play.

“But like I said I am truly sorry but the tournament has nothing to do with this and it’s just a coincidence.”