The past four years have been a hard road for New South Wales professional Nikki Garrett.

But the 27-year-old believes she has weathered the storm and is slowly edging back towards the winner’s circle. 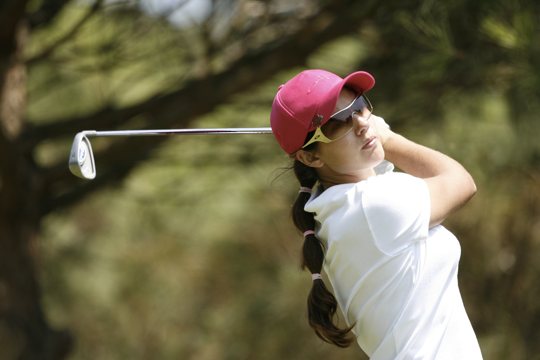 Garrett won twice on the Ladies European Tour in 2007, but wins have been elusive since.

But 2011 has provided some positive indications.

Since May, Garrett has amassed four LET Top 10s, including an unofficial second-place finish at June’s Tenerife Match Play and has not missed a cut.

With only the Dubai Ladies Masters remaining for 2011, Garrett finds herself 37th on the LET money list following a 16th placing at last week’s Indian Open.

“My year has been consistent, having not missed a cut since the first tournament in May.”

“Money-wise it doesn’t look amazing but all my Top 10s have been in the smaller money tournaments and my second placing wasn’t an official event so it didn’t count towards the money list.”

Garrett said nerves have played a part in her failure to contend regularly since 2007, but claims it’s just a matter of time before her next victory.

“The more I put myself in a good position then the better and easier it becomes. I’m a hard worker so I know I’ll be back in the winners circle again,” she said.

There’s also a sense of relief within the Gosford-born professional that her darkest times on and off the course may be behind her.

“I lost a lot of confidence and it took a while for it to come back. My swing wasn’t in a great place either.”

“I remember I flew home early in 2008 and I went straight to my coach Darren Chivas and he said ‘I haven’t seen you swing it this bad since you were about 12′.

“It was hard going from such highs in 2007 to such lows in 2008, but I wouldn’t change it. I learned so much more about my game, my strengths and weaknesses and myself in general that year.

“Probably a lot more than I would have learned if I kept winning so in a way it might have been a blessing in disguise to go through that early in my career.”

Garrett has been absent from the majors since the 2009 Women’s British Open but she said patience would get her back in to the fray.

“I have so many years to play in the majors. For the British Open I need to be in the top 25 on the LET money list to gain automatic entry. I missed out by one spot this year so good golf will get me in the majors,” she said.

Garrett is also itching to improve her performances in Australia this summer.

She missed the cut at February’s ANZ Ladies Masters on the Gold Coast and finished tied 22nd at the Women’s Australian Open in Melbourne.

“It’s always so good to play in front of home crowds. They are always so supportive. The schedule continues to grow in Australia and it’s so exciting for all the Aussie girls,” he said.

“It is definitely the time of year I enjoy the most.”

Garrett’s main goal for the next year is to accumulate enough prizemoney to tackle the 2012 Japanese Tour School.

“I have wanted to do it for a couple of years but with no sponsors I can’t afford it,” she said.

Off the course, Garrett’s physical training regime has evolved.

Once a keen boxer, she now juggles several activities to stay fit.

“These days I am more into yoga so I have done a complete turnaround. But I also like to play squash when I’m at home.”

“I usually play with my boyfriend and we are quite competitive with each other so it’s always a good work out.”

“I try and do cardio but I find it so boring. I like to play extra sport rather than going for a 5km run.”

“I go to the beach with the dog and muck about there. Also near my house there are great stairs and hills so I run up and down them.”

Despite not winning, Garrett remains one of the more marketable Australian female players.

She said her involvement in business comes with the territory of being a professional golfer.

Golf has brought me everything I own and have. I love promoting the game and I love that side of business. I’ll always try to stay in the business of promoting women’s golf in Australia and worldwide.”