Getting To Know: Jason Day

Q: You are half Filipino – do you still stay in touch with your Filipino roots, such as eating Filipino food etc?

Jason Day: I’m half Filipino on my mum’s side – she’s from a small town near Manila, I’m not sure exactly where. I grew up eating some Filipino foods but I’m not very familiar with the food. I don’t speak the language but I feel I should get back in touch with my roots.

Q: Any plans to visit the Philippines?

Jason Day: I’d like to maybe one day go over there and support the Asian Tour, perhaps play in the Philippines Open. Take my mum back there – she hasn’t been back in a while. 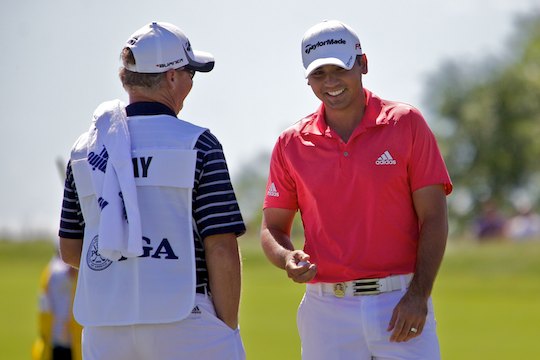 Getting To Know: Jason Day

Q: When you have kids, would you make sure they also play golf like their dad, or would you let them choose the sport or endeavor that they wish to be active with?

Jason Day: I hope I have some active kids who will want to get into sport but if not, that’s fine.

Of course if they did like sports I would slightly push them in the golf direction but I also know how hard you have to work so I wouldn’t push too hard. If they wanted to get into another sport then fine, but golf would be no.1.

Q: Who is Jason Day during the off-season? What are you busy with when you are not playing golf?

Jason Day: I do very little. I don’t go out and party every week. I spend a lot of time with my wife who is my best friend and just relax.

I go to the gym a lot, even on PGA Tour I go to the gym every day. Sometimes it’s five or six days a week and even in off season. And each gym session lasts for three to four hours, so it doesn’t leave much time for anything else.

Q: Do you love any other sports aside from golf?

Jason Day: I don’t follow lots of Australian stuff anymore but I’m a big fan of NBA basketball and the Cleveland Cavaliers – my wife’s from Ohio. Unfortunately, their form has been a bit shot this year but I’m pumped for next season.

Q: Who would be your dream foursome flight?

Q: Supposing you were not a PGA star, what would you be now?

Jason Day: I would try and go into the military. I’ve always been interested and I would want to serve my country.

Q: What are your views on the new iron groove regulations?

Jason Day: I don’t mind it at all. You’ll see on PGA Tour that when they change the grooves a lot more people hit the green. Square grooves made it a little more hit-and-miss and people don’t want to miss the green, so I don’t mind the changes at all.

Q: What is your practice routine?

Jason Day: There are lots of things I’m working on. We keep detailed stats so we know where I need to improve.

I know the biggest thing is my tee shots. I was in the top 15 on the PGA Tour but I lack a little in accuracy. I need to get up to 65 per cent. I’m at 56 per cent at the moment. So I think one or two more fairways then I can set myself up a lot easier to go out to hit maybe one or two more birdies.

Q: Your one of TaylorMade’s newest success stories. Any thoughts on the newest products of both TaylorMade and adidas Golf? How has it helped you improve your game and also the entire sport of golf in general?

Jason Day: The wedges I have now with the changeable faces – they’re really great for professionals. If I have a club and touch another club which is exactly the same, I can tell the difference. I know if there is a grip thickness not quite there or a shaft not quite there when I hit it or if it’s heavier or lighter.

With TaylorMade wedges I’m getting great spin around the green and I can change the face every week when I want to and I don’t have to build another golf club from scratch. So I still have a club that feels very familiar to me. I change my grooves every week or every two weeks depending on how much practice I’ve done.

I think pretty much everything TaylorMade produces have helped the sport. It’s the No.1 driver on tour, the irons are great. But I think the biggest advancement is all the work they’ve put into the ball. You can get great speed and control out of the ball, you can control it in the wind, spin it.

That’s great for both amateurs and professionals.

Q: Did the win at Byron Nelson take the burden off your shoulders?

Jason Day: Yes, it definitely took the monkey of my shoulders as I’d had a lot of people saying I was going to win. And I would say I’ve just got to keep working hard.

I’m still a young player, a young professional still trying to learn how my game reacts to certain things, how I feel when I’m under certain pressures. I’m very happy now and feel like I’ve taken a lot of pressure off my shoulders.

I have a two-year exemption now so I can now go out there, relax and just play golf without worrying about keeping a card every year. During the last few tournaments I’ve been a much happier person, I mean I’m always happy but now I am very thankful for where I am right now.

What’s In My Bag?