Gibson’s record 55 given the nod by Guinness

He was always regarded as an extraordinary talent and has shot some stunning scores around his home course at Lismore.

Now 26-year-old Rhein Gibson has earned a spot in the Guinness Book of Records in the US by shooting what is believed to be the lowest official round of golf ever played. 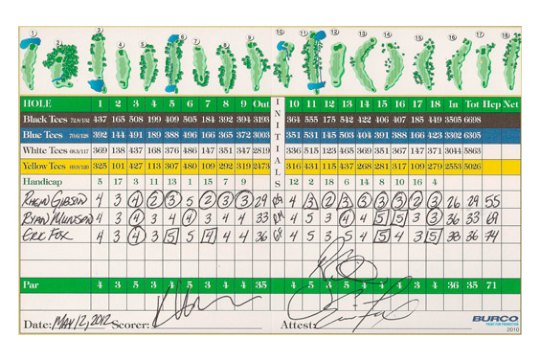 Gibson fired a stunning 16-under-par 55 for 18 holes at River Oaks Country Club in Edmond, Oklahoma late year and later admitted he didn’t even feel nervous that he was going so low.

He had just four pars in the round but slaughtered par on every other hole, bagging 12 birdies and two eagles.

Thanks to texting and Twitter, about 30 golf fans had gathered to watch by the time Gibson reached the final hole, where he duly rolled in a five-foot birdie putt for the 55.

A 2008 graduate of Oklahoma Christian College, where he was a four-time first-team All-American, Gibson said shooting a score like that felt “pretty surreal”.

“I really wasn’t nervous on those last few holes,” he said.

“I would probably be more nervous over a three-foot putt to make a cut.”

And if there were any doubters over his feat, it should be mentioned that River Oaks is a par 71 which measures 6,698 yards from the tips and according to the course’s owner Andy McCormick, it was playing pretty close to that length.

And, just for the record, Gibson’s record round was witnessed by Ryan Munson, an Edmond-based financial adviser and Eric Fox, a former collegiate golfer for South-western Oklahoma.