It was probably inevitable that the ’19th hole’ would eventually get more attention from some of our leading golf professionals.

It could be said that some of them spend enough time there. 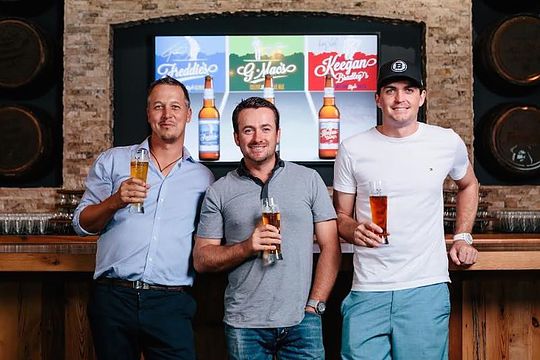 Yet that was probably exactly the reason Swedish professional Freddie Jacobsen decided it would be perfect to launch some boutique beers especially for golfers.

So Jacobsen approached two of his close friends on the US PGA Tour, Graeme McDowell and Keegan Bradley and the two former major winners agreed his idea was a winner.

So the trio have launched three unique brands of boutique beer through Florida-based brewer The Brew Hub.

Don’t look for them in your golf club just yet, though.

At this stage the three brews will only be available on tap at a select few golf courses and restaurants around Florida.

But the plan is to expand and have them available to the public in bottles and cans sometime in 2015.

Each beer is between 4.5 and five per cent alcohol by volume.

“We wanted to create craft beers for the 19th hole, approachable craft beers, something the golfer can enjoy and maybe associate those with a golfer like Freddie Jacobson, Keegan Bradley and myself,” said McDowell.

Indeed McDowell’s Nona Blue tavern in Lake Nona, Florida, which features G-Mac and Cheese on its menu, will be among those carrying GolfBeer’s offerings.