Golf lost two much-loved personalities from both sides of the Pacific last week with the passing of Victorian star Ian Stanley and popular American Bruce Lietzke.

Both players had been battling, before finally succumbing to cancer…Stanley was 69 and Lietzke just 67. 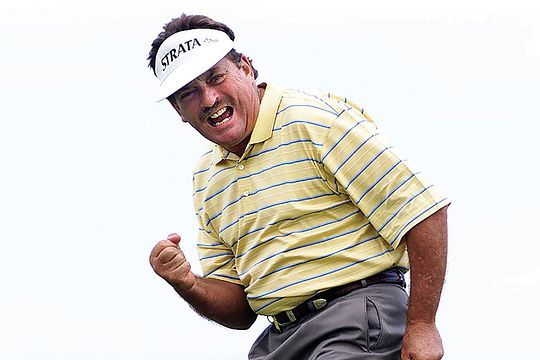 Stanley was rated one of Australia’s best players at his peak and was a regular competitor on the European Tour who became just as well known for his droopy moustache and toothy grin as his golf, which included a win in the 1975 Martini International as well as the 1975 Queensland Open and the 1985 NSW Open.

He also partnered the late Ted Ball as Australia’s representatives at the 1974 World Cup in Venezuela.

He also had a career revival when he turned 50 and attacked the European Seniors Tour, winning the 2001 Senior PGA and the Senior British Open titles.

He later dabbled in some golf course construction as well as golf commentary before the illness struck in his mid-60s when a growth was discovered on his kidneys and later spread to his spine.

“It has come to the point where we don’t think we can beat it. But we’ve put up a good fight,” Stanley said in one of his last interviews.

“Sitting around in hospital as much as I have, you tend to do a lot of reflecting.”

“I was glad I made the effort to go out there and play again when I turned 50.”

Lietzke, the laid-back Texan who preferred to go fishing rather than practise his golf, passed away after battling brain cancer.

“He touched on parts of five decades as a player, competed in 700 tournaments as a member of the PGA Tour and PGA Tour Champions, and recorded 20 victories.

“But to celebrate Bruce Lietzke’s life properly, we offer praise to the great family man and the cherished friend to many.”

With family, fishing and a large muscle car collection to tend to, the 13-time PGA Tour winner had little time or desire to tinker with a trusted swing that didn’t need tinkering — as the banana story hilariously illustrates.

It started at the final event in 1984 when Lietzke told caddie Al Hansen that he wouldn’t touch his clubs again until the 1985 opener. The unbelieving Hansen put a banana in Lietzke’s golf bag as a test, only to discover the rotten fruit still there in January.

Lietzke played in the United States’ 1981 Ryder Cup victory in England, and finished second to John Daly in the 1991 PGA Championship. He won seven times on the Senior Tour, the last victory coming at the 2003 US Senior Open at Inverness.