US Collegiate-based Aussie, Oliver Goss, has been named on the Ben Hogan Award watch list.

The most prestigious award in US men’s college golf, The Ben Hogan Award is presented annually to the top men’s NCAA Division I, II or III, NAIA or NJCAA college golfer taking into account all collegiate and amateur competitions during the past 12-month period. 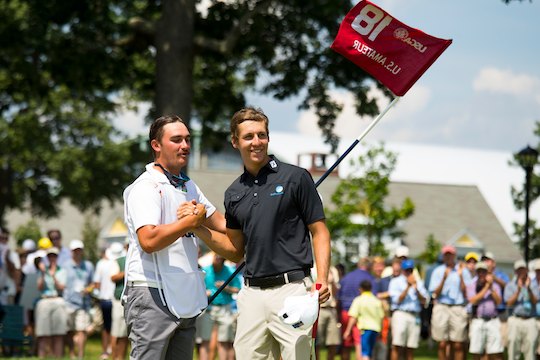 Oliver Goss at the 2013 US Amateur Championship (Credit: USGA)

Goss, a sophomore at the University of Tennessee, has been in the tough US collegiate system since December of 2012 and continues to bank stellar results that has Goss as our highest world ranked amateur at No.6.

In April, Goss will tee it up at the 2014 Masters at Augusta National Golf Club after earning a ticket to Augusta with his runner-up finish at the 2013 US Amateur Championship.

The award, which was first issued in 1990, honours the outstanding amateur collegiate golfer and Goss will be aiming to become the first Australian ever to receive such award.