Graham’s long wait for Hall Of Fame ends this week

Come Monday morning St Andrews time, the long wait will be over for Australia’s David Graham when he will be formally inducted into the World Golf Hall of Fame.

Graham’s omission has frustrated, if not rankled, the 69-year old in recent years before the news last October that he would at last receive due recognition for a career that has included two major championship victories – the 1979 U.S. PGA and 1981 U.S. Open – and nearly 40 professional victories across five continents. 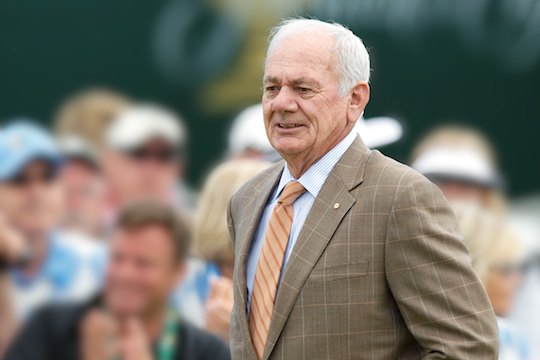 “Yeah, it’s been a long time, but like they say, good things are worth waiting for,” Graham said in response to the announcement last year. “I want to thank the selection committee for appointing me to the Hall. It’s a great honour, and I’m delighted.”

Graham’s induction brings the number of Australians in the Hall to five, along with Peter Thomson, Kel Nagle, Greg Norman and Karrie Webb.

For the first time in the Hall’s history, the Induction Ceremony has been taken outside the United States and will be held at St Andrews University on Monday, ahead of The Open Championship which tees off on Thursday. With many active and retired Open champions in St Andrews this week, the Induction Ceremony will be a prestigious occasion and one that is sure to bring out the emotions in Graham.

Outside his immediate family, a number of key figures have played critical roles throughout Graham’s rise from a difficult childhood to dual major champion. His early mentor George Naismith at Riversdale Golf Club and fellow professional and close friend Bruce Devlin are among those that Graham will most certainly be acknowledging for their support in his acceptance speech.