Greg’s Coolum ace not the first

The magical ace Australian PGA champion Greg Chalmers dunked on the first day of the 2011 tournament at the Hyatt Regency Coolum was not the first hole-in-one recorded on the short par three second hole this year.

Coolum member Colin Goldschmidt aced the same hole in April, while a former in-house guest at the resort, J. Wilson, is also on the honour board after acing the second in April 2010. 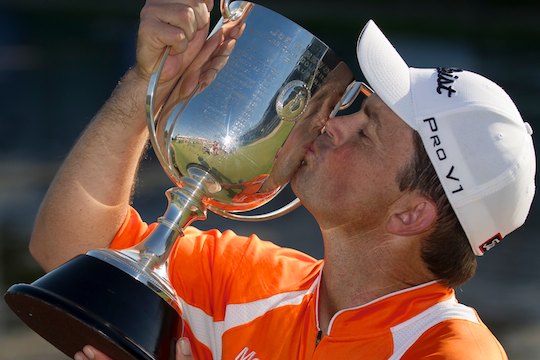 But Chalmers’ feat, seen by millions on TV, was the first by a professional golfer.

After finding himself well back in the field after a one-under 71 on day one of the 100th Australian PGA championship, the recent Australian Open (The Lakes, Sydney) winner clawed his way back to win his first Joe Kirkwood Cup, beating Robert Allenby and Marcus Fraser in a play-off.

The 10th PGA championship held at the Hyatt Coolum resort was one of the most successful in history, attracting some of the world’s best golfers including reigning British Open champion Darren Clarke, US stars Bubba Watson and Rickie Fowler, Koreans YE Yang and KT Kim, as well as top Australians Adam Scott, Jason Day, Geoff Ogilvy, Stuart Appleby, Aaron Baddeley and John Senden.

Chalmers carded rounds of 71, 69, 69, 67 for a 12-under total and conceded his ace kick-started his round on day one. He followed the hole-in-one with three birdies over the next seven holes.

His opening round started on the back nine and he eagled the par five 12th after holing a bunker shot from in front of the green. But he turned one over after a double at 17 and a bogey at the signature 18th.

Chalmers compounded his problems with another double bogey at the par five first and was three over standing on the tee of the 158m second.

“That shot turned my day around. From being flat and ordinary I suddenly had a spring in my step,” Chalmers recounted.

“And while luck is always an element with a hole-in-one, I did hit a lovely shot there.”

To add to the excitement, his mum Sandra was greenside to see a hole-in-one from her son for the first time, although Chalmers later revealed it was his 12th ace in competition golf.

Remarkably, fellow Aussie and playing partner John Senden aced the same hole the next day, and the feat may interrogate the record books for a professional tournament in Australia.

When previously did golfers in the same group, on consecutive days, each score a hole-in-one on the same hole at the Australian PGA?

But one fact is uncontested, the 2011 Australian PGA champion is only the fourth player, and the first professional, to ace the second hole on Coolum’s ‘new’ course.

The layout at the Hyatt Regency has recently been reconfigured, with six holes on the eastern side of the David Low Way replaced by a looping six at the western extremity of the property.

The first time the layout was played in a competition was the 2009 PGA championship.

“No-one had scored a hole-in-one on the second in a competition round until Greg achieved the feat,” Hyatt golf manager and PGA professional Paul Crangle said.

“For playing partners to ace the hole in consecutive days with the hole playing its most difficult, is quite a remarkable feat. But I suppose we come to expect magical things from these wonderful players.”