He hadn’t missed a cut on the OneAsia Tour all year – so Victoria’s Matthew Griffin wasn’t about to blot his copybook at the Emirates Australian Open at Royal Sydney last weekend either.

Griffin might not have contended for the Stonehaven Cup but with rounds of 73-72-70-70 he finished in a tie for 24th and secured the 2013 Order of Merit title at the co-sanctioned event’s season-ending event. 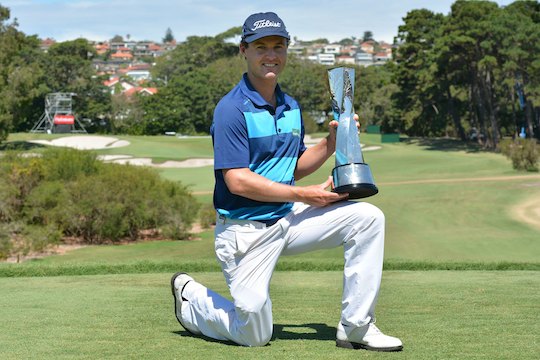 The 30-year-old from Melbourne had led the OneAsia Tour’s money list since winning the SK Telecom Open in South Korea in May and consistency has been a trademark of his game ever since.

Both those Koreans were absent from Royal Sydney, meaning Griffin’s biggest threat could come from fellow Aussie Scott Strange, who was in fourth place and poised to snatch the OOM title if he could finish in the top three placings.

Nick Cullen, David McKenzie and Jason Norris were also outside chances if results went their way.

“I’ve definitely played the best golf so far in my career, so at the end of the year if you can say that you’ve done well,” said Griffin a natural left-hander who actually plays his golf right-handed.

“I always try to set myself goals and this year was to win the OneAsia Order of Merit.”

“My main goal for next year is to try to do well in the [European and Japan Tour] co-sanctioned events and try to get some status there as well.”

Griffin does face a short stint on the sidelines if next year’s plans are to come to fruition.

He plans to have minor surgery on a niggling wrist injury after OneAsia’s Ryder Cup-style Dongfeng Nissan Cup this month, where he will represent an Asia-Pacific select side against Team China.