Scott Hend secured the prestigious Asian Tour’s Order of Merit crown at the season-ending UBS Hong Kong Open on Sunday, becoming the first Australian to win the title and the fourth player to surpass US$1 million in earnings during a season.

The 43-year-old Hend won twice at the True Thailand Classic and Queen’s Cup and finished top-10 on three other occasions including a runner-up at the Omega European Masters in Switzerland during a memorable 2016 campaign.

Winning the money list title also ensures Hend earns an invitation into what will be his first Masters next April at Augusta National.

“It’s quite special. Obviously winning any Order of Merit anywhere is very special, and this will stay with me forever,” said Hend after he carded a closing 4-over 74 on Sunday, to increase his season haul to US$1,004,792.

“It’s just a culmination of a lot of years on the Asian Tour and coming so close and not getting over the line; it’s finally nice to reach the top and grab the trophy.” 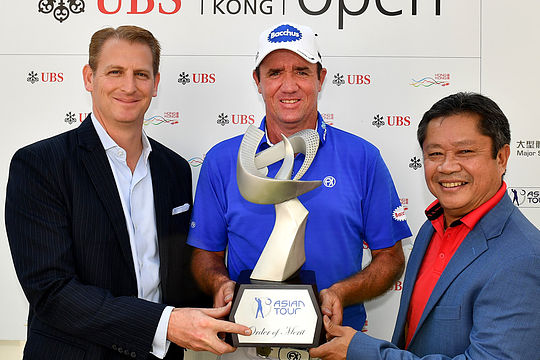 Hend’s only rival for the Merit crown, Marcus Fraser, needed to win the US$2 million UBS Hong Kong Open to have any chance of winning top spot but he failed to do so at the Hong Kong Golf Club, signing off with a closing 66.

A disappointing campaign in the World Golf Championships event in Doral at the start of the year proved to be the spark that Hend needed to get his 2016 season going as he returned to Asia the following week and won in Thailand.

“It’s a bit of a funny start to the year because I played in Doral, was 22-over par for four rounds and we came to Thailand and all of a sudden, the following week I was 18-under,” he recalled.

“I just managed to level it off and play really solid during the middle of the year and fortunately enough for me, I won a couple tournaments and I came in a couple top fives. So it was quite nice.”

“It’s been a great year. I only missed out on one goal and that was obviously to get top-50 in the world and play the Masters next year. It was a hard task; I had to come second here or I had to win. All in all, it’s a very good year.”

India’s Jeev Milkha Singh was the first to hit the seven-figure mark in Asia where he earned US$1.45 million in 2008 while Kiradech Aphibarnrat of Thailand won US$1.12 million in 2013 and 2015 Merit champion Anirban Lahiri accumulated US$1.13 million last season.

In what is his 10th season on the Asian Tour, Hend has capped a truly impressive career on the region’s premier circuit with nine victories. He also finished runner-up on the Order of Merit twice in 2013 and 2014 and was fourth on three other occasions in 2007, 2009 and 2014, indicating his consistency in his game.

“It’s quite special. Obviously winning any Order of Merit anywhere is very special, and this will stay with me forever,” said Hend.

By far, Hend, one of the longest drivers on Tour, is also the most successful international golfer on the Asian Tour and has won eight tournaments over the last five years, the most by any player in Asia during the same time.

He also enjoyed the honour of representing Australia alongside Fraser at the Olympic Games in Rio de Janeiro in August when golf made a welcome return into the programme following a lapse of over 100 years.

Despite his success, he vowed to work even harder to keep up his success rate. Hend said: “I’m going to restart in Abu Dhabi. I’ve got four weeks off. I’ve got to get in the gym for four weeks and try to strengthen these old muscles and get them firing again.”

In the Tour card battle, Australia’s Scott Barr claimed the final card for 2017 by finishing in 62nd position on the Order of Merit to keep his full playing rights for next season.