Hend has his eye on the Asian Order Of Merit prize

Popular Australian Scott Hend has one hand on the trophy.

And all he needs to do is play well in next month’s $US2m USB Hong Kong Open to seal the deal and win his first Asian Tour Order of Merit title. 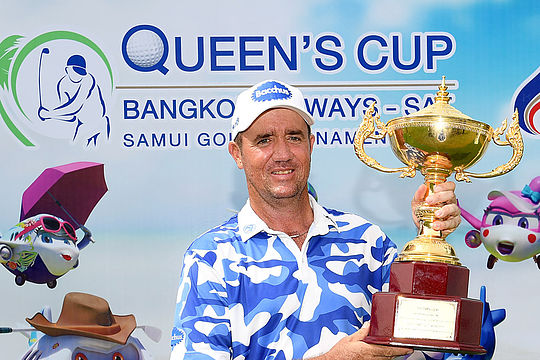 Boasting two Thailand victories this year, the big-hitting Hend has twice finished runner-up in the Asian OOM, in 2013 and 2015.

His amazing consistency will be rewarded if he can hold off fellow Aussie Marcus Fraser and have a good week in Hong Kong, which would be enough to make him the first Australian to win that title.

It will be anything but easy for Hend in Hong Kong though, already Thai stars Thongchai Jaidee and Kiradech Aphibarnrat have confirmed they will be there alongside Olympic Games gold medallist Justin Rose, Masters winner Danny Willett and Ryder Cup stars Patrick Reed and Rafa Cabrera Bello.

“Going back to Fanling, where I’ve won before, will be a lot of fun and I’m hoping to play my best golf there again to contend for another win.

“I always enjoy playing in Hong Kong as there is such a great buzz around the tournament while the city is always a great place to visit.”

“My season has been pretty memorable with two wins and an appearance at the Olympic Games but I really feel I could have won one or two more tournaments if Lady Luck had been on my side.”

Going into the final few weeks of the Asian Tour Hend leads Fraser by a little over $US300,000.

And after watching Rod Pampling win in the US last weekend and earn himself a US Masters invitation for 2017, Hend would love nothing more than to be heading for Augusta as well, giving Australia a big contingent of contenders.

To do that he needs to crack a spot in the world’s top 50…he is currently ranked 63rd and a win in Hong Kong might be just the catalyst to get Hend to Augusta National.

“I’ve never played at the Masters and I think it would be a golf course I would be able to play very well around. Obviously like a lot of people, I have seen it on TV every April. I would like to be there once and walk down the fairways,” said Hend.