Guess who’s back? Only one of the greatest women golfers this country has produced, that’s all.

Yes, former Evian Masters winner Rachel Hetherington has come out of retirement and at the age of 42 is now playing pro-ams on the ALPG circuit. 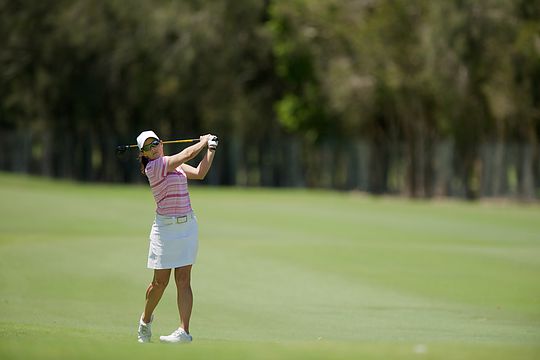 While the cheque for $160 will barely pay the fuel bill for the car trip from Queensland, it must have been a great relief for Hetherington just to be back mixing it with her old mates after retiring in 2010 to have their daughter Annie.

Aside from owning and operating the Rachel Hetherington Golf Range, Hetherington also joined the staff at Sanctuary Cove Golf and Country Club.

“I recently began working with our new instructor Randall Hollands Smith at the golf range and he has inspired me enough to play,” Hetherington said.

“I am finding golf fun again!”

At her peak, the former NSW golfer won eight LPGA titles and boasted 70 top-10 finishes on the world’s richest women’s golf tour, for a return of $US5.7m prizemoney.

“I don’t have a large amount time to practice, so I try to make it quality practice and yes it is fun,” she said.