Hull of a year ahead for Katherine

Katherine Hull is determined to have her biggest year yet on the USLPGA, with a top five finish on the money list her number one goal for 2011.

“I know I have the game to do it, it is just going to be a matter of how I handle things off the golf course that allows me to play my best on the course,” the 29-year-old said. 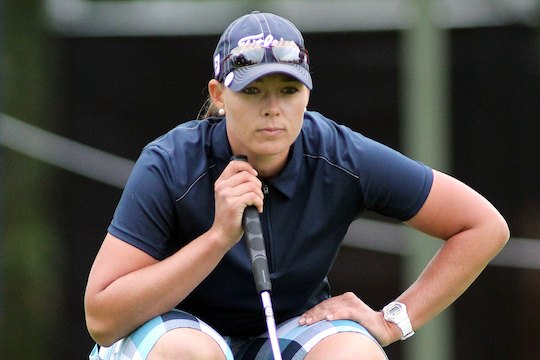 Hull of a year ahead for Katherine

Hull is entering her sixth year on the world’s toughest tour and admits she is still trying to figure out the best way to manage her game that often clashes with her perfectionist nature.

Sometimes her quest for the perfect shot has detrimentally affected her results, a chink that her coach, Steve McRae and caddy Vern Tess, have been frustratingly trying to iron out for some time.

“I am hard on myself. I have had a chat to my caddy and my coach about it,” she admitted with a wry smile.

“I guess I got a little bit of heat from them but they are just trying to get my head out of my backside.

“They are doing everything they can and I am not giving it 100 per cent to them or even to myself really.”

By 100 per cent, Hull means not only what is happening on the short grass but everything else that is affecting her outside the ropes.

“Stuff that I am doing off the course is affecting how I prepare. I have to manage that a bit better,” she said.

“I’ve had a few too many late nights and if I go to bed late then I get out of bed later, then the body clock is off and then I don’t put the effort in that I need to at the gym,” she explained.

“As a result, I don’t release that energy and then I am more wound up on the course so I am likely to blow some steam out there. I figured this out the hard way but at least I have figured it out!”

Hull is also reducing her playing schedule this year in the hope it will keep her keen to compete at each tournament.

“I played six tournaments in a row at the end of the year and I kind of burnt myself out. By the fourth tournament I didn’t really want to even be out on the golf course,” she said.

“It is no coincidence that Annika Sorenstam ever only played maximum three in a row.”

She is also hoping a less hectic playing schedule will make her more consistent.

“Last year I only had four or five top 10s which if you look at players like Song-Hee Kim who had 20 top 10s, that is what it takes,” she said.

“That will be the real key, getting into contention more weeks than just a handful.”

Hull has long been considered the girl most likely to supplant Karrie Webb as Australia’s number one female golfer, but the fellow Queenslander says she never thinks about usurping the Hall of Famer.

“It is not my main goal by any means and I am sure Karrie wants to stay at the top of her game for at least this season and the season after that,” she said.

Nor does she feel the weight of public expectation.

“I don’t feel the pressure. I kind of like it, but I think it will be nice for Australian golf if, not just me, but everyone else, steps it up and helps Karrie out in terms of flying the flag.”

And there’s no guessing who has her sights on being the chief flag bearer in 2011.