As a matter of fact, the Florida-based English star has a bank account that obviously lets him have his ‘toys’. 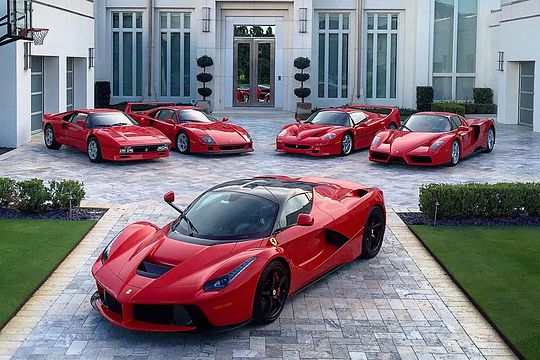 The flamboyant Poulter last week posted a photo of himself with his latest acquisition….a Koenigsegg supercar.

Poulter even suggested it made his collection complete.

He ‘tweeted’ a picture of himself in front of five red sports cars, suggesting that “supercar 5 is complete” and commented that he felt “so lucky to collect them all”.

And although the 38-year-old is winless on the US and European PGA tours since 2012, he is quite obviously making a more-than-ample living out of splitting his time between both tours.

Poulter has been compared to another millionaire, boxer Floyd Mayweather, who also collects sports cars and recently snapped up an ultra-rare $7m supercar.

Poulter’s latest buy, the famed LaFerrari hybrid will sit alongside four others of the finest from the Italian supercar-maker – the 288 GTO, F40, F50 and the Enzo.

And while he might appear to be in ‘cruise control’ on the golf course, the ever-confident Poulter hasn’t given up hope of winning something big, like the FedExCup or the Race To Dubai before the years is out.

Now ranked 34th in the world, Poulter has had four top 10 finishes in 16 events and, by his own admission, life is good.

Incidentally, he also owns a couple of others vehicles, including a Rolls Royce Ghost and a Ford GT-40.

But Poulter suggested the Rolls Royce might go and he’s considering replacing it with a Bentley later this year.

And he says he’s now got his eye on a Mulsanne.