India’s a study of concentration

Seventeen-year-old Southport Golf Club women’s champion India Matthews has won an athletic scholarship to Northern Arizona University and is believed to be the first indigenous Australian female to play college golf in the US.

Originally the intention was for India to start her studies in August next year, but she was phoned two weeks ago and will now join the team in January. 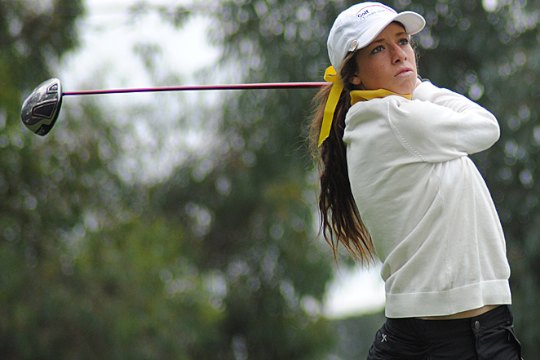 “I am just so excited,” said the Year 12 Robina State High student.

“I have heard of so many Australian juniors who have studied at US universities and played on their golf teams, and their games have improved out of sight.”

“It is an intense environment and very competitive. I know that is what I need to take my game to the next level. While I will be studying for a degree while at college, my goal is to play golf professionally.”

India decided earlier this year she wanted to study and play in the US and estimates she e-mailed close to 100 applications.

But fate played a hand with one e-mail landing in the in-box of golf pro Leslie Spalding, who recognised the name of India’s dad Greg.

“I have caddied for some of the visiting pros during the ANZ Masters at Royal Pines in recent years and one of them was Leslie,” explained Greg, who hails from a talented Tasmanian golf family.

“It is quite bizarre how India’s application happened to finish up with Leslie, maybe it was fate. Leslie recommended India to three colleges who each contacted us, and Northern Arizona was her choice.”

India, who received her first golf handicap of 45 in 2006, was down to 21 by the end of that year and now plays of four, will study nutritional science at college.

And, her dad says, she will be back in to golf after something of a hiatus in 2011.

“Golf has taken somewhat of a back seat this year,” he said.

“When India made up her mind she wanted to study and play for a college team in the US, she also realised attaining that goal was dependent of her scholastic achievements in Year 12.

“So golf went on the backburner, her handicap slipped from two to four, but I’m proud to say she has done well at school.”

“We have added some depth to our roster and they make us more competitive within our team,” Bedortha said.

“I liked what I have seen from India on video and she is excited to come to the United States to play. I think she will be a great addition to our squad.”

India Matthews is a four-time qualifier for the Greg Norman Junior Masters and played in the Australian Amateur and Junior Girls Championships last year, finishing 58th and 54th, respectively.

But one of her proudest career moments was winning the Queensland Indigenous women’s championship as a 13-year-old in 2008.

En-route to the title she set a course record 73 at Murgon Golf Club in the final round.

The following year she won the Australian Indigenous championship.