Is the Tiger vs Phil $10m match closer to reality?

Are there two more revered golfers in the world these days than Tiger Woods and Phil Mickelson? Then how about a winner-take-all match between these two iconic golf ‘veterans’?

Don’t scoff, it may happen – and sooner than you might think. 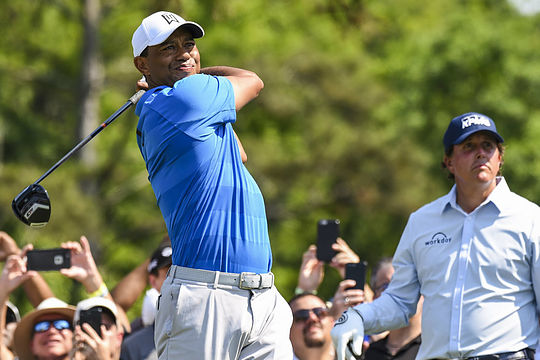 Evidently there was talk of just such a match-up before this year’s Players Championship. It didn’t happen.

Then a July 3 date was discussed as a possibility before they head for the British Open.

Yet Mickelson insists a $10m winner-take-all match is still in the pipeline.

Naturally such things as telecasts and sponsorship are still under discussion and are the reason it has not already gone ahead.

“I thought it was done for [July] 3rd but obviously it wasn’t,” said Mickelson.

It appears the venue is set and Shadow Creek in Las Vegas would be the venue for their clash.

And while they have not been regarded the closest of friends over the years, both are keen to be part of this business agreement.

“I’m definitely not against that,” was Woods recent comment when asked about the possible match.

“We’ll play for whatever makes him uncomfortable.”

Mickelson and Woods had everyone in golf talking when they played a practice round together before this year’s US Masters.

“A few weeks later they were paired together at The Players Championship, fuelling further speculation about their alleged rivalry.”

“The excitement that’s been going on around here, it gets me thinking: Why don’t we just bypass all the ancillary stuff of a tournament and just go head-to-head and just have kind of a high-stakes, winner-take-all match,” said Mickelson at the TPC Sawgrass in May.

“Now, I don’t know if he wants a piece of me, but I just think it would be something that would be really fun for us to do.”

“And I think there would be a lot of interest in it if we just went straight to the final round.”

This year’s Masters winner, Patrick Reed, thinks the duo should play for their own money.

“I would pay a little bit more to watch it if it was for their own money, for sure,” Reed said prior to teeing it up at this week’s the Scottish Open.

“It’s going to be entertaining. I think it would be more entertaining if it was for their own money because I think the guys would grind even harder.”

And they can certainly both afford it.