But for 15-year-old Horton Park two-marker Lauren Mason, a hip reconstruction 2½ years ago has rekindled her goal to become a golf pro, touring the world on the LPGA circuit like her idol and fellow Sunshine Coaster, Katherine Hull. 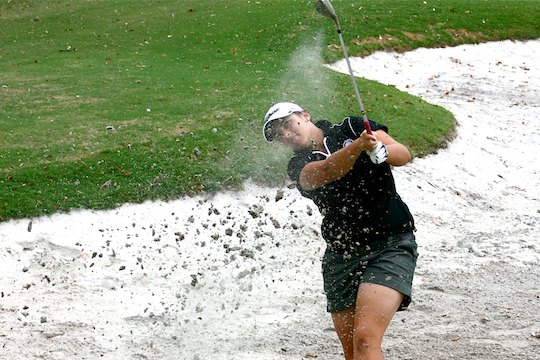 And already the wheel of fortune is turning her way with selection in the Queensland girl’s team for the annual interstate matches at Pacific Dunes Golf Club at Port Stephens from April 18-20.

“I am thrilled just to be selected,” said the year 11 Siena College student, the youngest in the squad of Emily McLennan, Christina Mew, Jaimee Dougan, Gennai Goodwin and Zoe Field.

“Before my surgery and suffering so much pain and discomfort, something like this happening to me was just a dream.”

But Lauren did not just battle the physical demons of recovering from the protracted surgery that took her away from golf for eight months. She also struggled to overcome the personal tragedy of the loss of the doctor who was finally able to successfully diagnose her medical condition.

After Lauren was initially poorly diagnosed and had endured endless physio treatment that exacerbated the problem and heightened the pain, Maroochydore sports physician Dr June Canavan identified that she was suffering from slipped capital femoral epiphysis – a slipped growth plate of the right hip.

“I had just started playing golf again and was so happy with my progress, and so thankful to Dr June for determining my medical problem. I was shocked and saddened by her death,” Lauren said.

Lauren was also fortunate to have the surgical expertise of Dr Geoff Donald, head of Orthopedics at RBCH.

“Without his great surgical ability and new techniques I hate to think what impairment Lauren might have suffered,” said her mum Leanne.

But just as the hip surgery has not hampered Lauren’s golf progress, nor did the death of the woman she considers something of a miracle worker.

The pain had become so bad that playing in the final of the Queensland girl’s amateur match play championship in 2008, she literally surrendered when the event went to the 19th hole.

“I just could not walk any further,” she said.

“On the recommendation of a friend, my mum phoned Dr June who saw me the next day, even though her waiting list was six months. Two days later I had surgery.”

She now carries two pins in her right hip and one in her left, and says her hips are as stable as ‘brand new ones’.

Lauren is coached at the Twin Waters Golf Academy by Grant Field and Anthony Gilligan, and both are full of admiration for the dedication and work ethic of their young pupil.

“She has worked very, very hard to make this team and her selection is a just reward, and well deserved,” said Field, who is ironically coach of the Queensland boy’s team.

“This is a very strong Queensland team and she has done well to make it. But Lauren knows she has plenty to work on if she is to get where she wants to go.”

And where she wants to go is to a university in the US, to study and play golf, just as her idol Katherine Hull has done.

“I’m hoping to go to the Callaway World Juniors again in San Diego in July this year,” she said.

“Most of the talent scouts from the universities are there, so it will be up to me to impress them.”