After finding ice skating not to her liking, 17-year-old Jaimee Dougan has her sights set on a career that she hopes will take her on to the same world stage that currently parades another Beaudesert young gun.

Jaimee is already being likened to fellow Queenslander Katherine Hull, but it is former Kooralbyn International College student Jason Day who is Jaimee’s golfing hero. 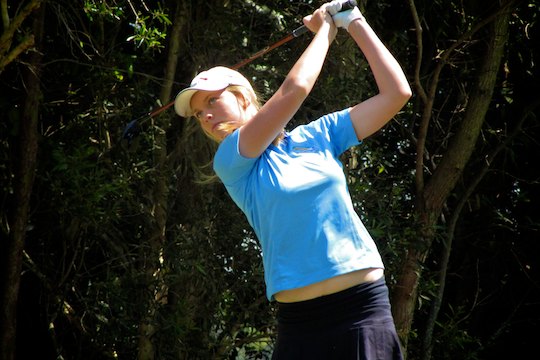 “Obviously she would like to conquer the women’s world scene as Katherine has done and is mightily impressed with her achievements, but Jaimee’s golfing idol is most definitely Jason Day,” said her proud dad Alistair.

“Since she started playing golf as a nine year-old she has been aware of Jason’s success, both as a student at her school and on the world scene, and that has given her a great deal of confidence. Jaimee can see that what Jason has achieved is a tangible goal for her as long as she works hard and believes in her ability.”

And that ability shone through recently when Jaimee shot a seven-under 65 at Noosa Springs during the Invincibles IGA Sunshine Coast Junior Masters Championship to establish a course record.

She birdied the final five holes in a round that included eight birdies, but amazingly she bogeyed the short par four 11th, the easiest hole on the course.

Initially it was thought Jaimee had broken a course record held by Hull, but Noosa Springs manager Mark Brady has confirmed no official women’s record had been recorded.

“Katherine once shot a sub-par round during practice, and a woman playing off 33 had 57 stableford points, but no certified course record for women has been established since the course was opened in 1999,” he said.

“We will certainly recognise this round by Jaimee as our official course record and will have her card framed and placed in the trophy room.”

Jaimee went on to win the four-round Sunshine Coast championship – played at Noosa Springs, Pelican Waters, Twin Waters and Peregian Springs – by eight shots with a tally of 294 on the four resort courses. In recognition, she has been voted winner of the Invincibles Drummond Golf achiever of the month award for September.

According to her dad the record round at Noosa Springs has been the highlight of her short career, and could well be the stepping stone to a future on the international stage.

“She wants to be a golf professional, and a lot of people whose opinions matter thinks she has what it takes,” he said.

“Jaimee works hard at her game under PGA coach Mark Chambers and is confident in her ability, so we just hope she can turn her natural talent in to a golfing career, just like her idol Jason Day has done.”

But things could have been much different for Jaimee had she not reverted back to golf as a teenager, after her fledgling ice skating career floundered.

Her elder sister Kara however, did elect to follow ice skating and has represented Australia.

Jaimee is currently finishing Year 12 at Kooralbyn International College and will assess her golfing future when school is out. In the interim she will contest the Spirit International Amateur Golf Championship at Whispering Pines in the US.