Following his victory at the BMW New Zealand Open on Sunday, Golf Australia National Squad member Jake Higginbottom has confirmed he will move into the professional ranks.

Higginbottom’s final round 67 was enough for a one stroke victory in Christchurch, becoming the first amateur since Australia’s Harry Berwick in 1956 to win the title. 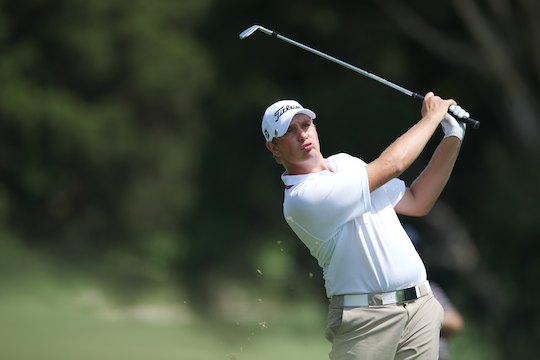 The victory also earned him a two-year exemption on OneAsia and the PGA Tour of Australasia and automatic entry into the second round of 2013 US PGA and European Tour qualification schools.

“I’ve discussed this with my team and we’re all very comfortable with the move. I feel that the time is right as I now have playing opportunities in the professional ranks. It’s exciting and I’m looking forward to starting my pro career,” Higginbottom said.

“I could not have done it without them.”

The 19 year-old finished as the leading amateur and tied 10th overall at the Talisker Masters at Kingston Heath a fortnight ago.

Golf Australia High Performance Director Brad James said “This is great news for Jake and exactly what Golf Australia and the State Associations strive to achieve in taking players to the next level. Jake has worked hard over the last 12 months and we’re pleased to see him make the next step in his career.”

A member of The Australian and Charlestown Golf Clubs, Higginbottom has won a number of National Amateur Ranking Events in recent years and has represented Australia on numerous occasions. He won the Riversdale Cup earlier this year and finished runner-up at the NSW Open in 2011.

Higginbottom’s first event as a professional will be the NSW PGA Championship this week at Mt Broughton Golf and Country Club in the Southern Highlands of NSW.

He will then play the Emirates Australian Open at The Lakes Golf Club in Sydney and the Australian PGA Championship presented by Coca-Cola at Palmer Coolum Resort on the Sunshine Coast.