At just 20 years of age, Japanese heartthrob Ryo Ishikawa is engaged to be married.

Moments after returning to his native Japan from yet another dismal Masters showing, Ishikawa confirmed at Tokyo’s Narita airport to waiting journalist his intentions. 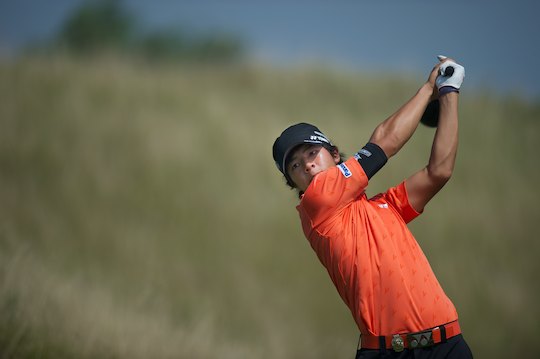 And Ishikawa, who had controversially been afforded another ‘Special Invitation’ to compete Augusta National, stayed true to his ‘Bashful Prince’ nickname by keeping other details such as the name of his fiancée, close to his chest.

“I’m now 20 years old, so I decided the time was right,” said Ishikawa.

“I got engaged last month, to a junior high school classmate.”

However according to reports Japanese newspapers continue to support Ishikawa’s privacy and wouldn’t name the girl – describing her only as ‘a tall, slender beauty with long black hair.”

No doubt, it’s the same woman present with Ishikawa when he attended the Presidents Cup in Melbourne late last year and was also in attendance at the recent Arnold Palmer Invitational at Orlando in Florida and at Augusta.

Ishikawa was quizzed on details of the wedding but all he would say was: “There is no special meaning or emotion. It just happens to be this timing.”

There was frenzy among the media in Japan last year when his mother inadvertently revealed: “There exists a woman whom Ryo Ishikawa is going out with.”

At 15 years of age, Ishikawa created history when he won a Japan Tour event to become the youngest winner of a tournament on any major golf tour.

Two years ago he created history in shooting a final round 58, the lowest also on a major tour, to win in his native Japan.

Ishikawa has won 10 times in his career but just once outside of Japan.

But once again, and after getting an Augusta ‘Special Invitation’ ahead of a more deserving Ernie Els, Ishikawa failed to deliver missing the Masters cut for a third time in four starts with scores of 76 and 77.

He may be known as the ‘Bashful Prince’ in his homeland but to the rest of the world it’s ‘Guinness’ – he just doesn’t travel.