Jason Day: Tiger has to dumb it down for me

Tiger Woods and Jason Day have struck-up such a great on-course relationship so much so the the pair now often text each other.

Their friendship was no more apparent during the opening two rounds of this year’s Open Championship at St. Andrews when Day and Woods were spotted often chatting between shots with the third member of the group Louis Oosthuizen virtually left out in the cold when it came to on-course chit chat. 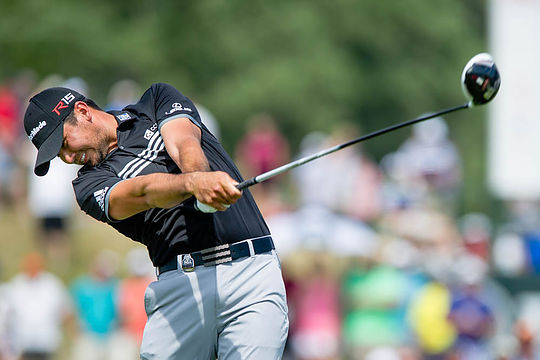 However Day admits that when Woods first began texting it was clear to the Queenslander he was not up to Woods’ level mentally.

So much so the 14-time Major winning American now has to ‘dumb it down’ to the 27-year old Australian’s level when texting Day.

“Tiger’s text messages, I have to digest them a little bit more, because he is very smart,” said Day.

“He has to kind of dumb it down to my level, man. He is saying these words, I’ve got to try to think them through.”

Of course, Woods is some 13 years older than Day but then the Columbus-based Aussie welcomes every opportunity to ‘pick’ Woods’ brain.

“Who wouldn’t want that mentorship from a player like that, especially on the golf course? To be able to receive text messages, and ask him questions, and him being so open towards me has been fantastic.”

And if Day were to capture this week’s Deutsche Bank Championship in Boston, and an event he has been runner-up in the past, then he could also speak to Woods about the pressures of being No. 1 in the world as a Day would take over the mantle should he win, and if current World No. 1 Rory McIlroy and the present No. 2 Jordan Spieth were to both finish outside the top two.

If so, he would join Greg Norman and Adam Scott as the only Australian-born players to be ranked No. 1 in the world.