Just when you thought Dustin Johnson’s year couldn’t get any better, he has now been named the 2020 PGA Tour Player of the Year.

The 36-year-old took home the season-long FedExCup title for the first time in his career following wins at the recent Tour Championship victory along with the Travelers Championship and the Northern Trust. 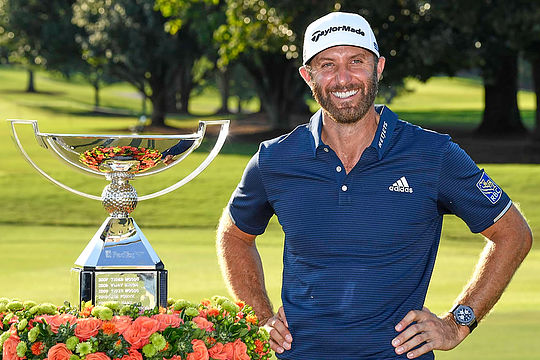 Johnson tied Justin Thomas for the most wins on the PGA Tour in the 2019-2020 season and incredibly it marked his fourth season with at least three wins and his 13th season in a row with one or more victories.

The Florida-native now sits at 27th on the PGA Tour all-time wins list with 23 victories and $67.6 million in career prize money.

Johnson recorded seven top-10s across the 2019-2020 season with two runner-up finishes at the PGA Championship and BMW Championship, and made 11 cuts in 14 starts, to end the season as World No.1.

It is the second time Johnson has been voted by his peers as the best player of the season after taking out the title in 2016.

“On behalf of the PGA TOUR, my congratulations to Dustin Johnson on being voted the 2020 PGA Tour Player of the Year by his peers, the ultimate compliment a player can receive,” said PGA Tour Commissioner Jay Monahan.

“Dustin made it known throughout the season that the FedExCup was a priority and his performances in the FedExCup Playoffs were nothing short of spectacular with two wins and a playoff runner-up at the BMW Championship.”

“His demeanour and athleticism on the course make it look very easy, but behind the scenes, he’s worked incredibly hard coming back from injury and his 2019-20 season speaks for itself in further bolstering his World Golf Hall of Fame resume.”

The 24-year-old was previously awarded the 2019 Korn Ferry Tour Player of the Year honours.