Golf is very much a one man (or woman) sport – so it’s amazing that two ‘team’ sports like cricket and AFL have driven Queenslander Matthew Guyatt into the game.

And not once – but twice. 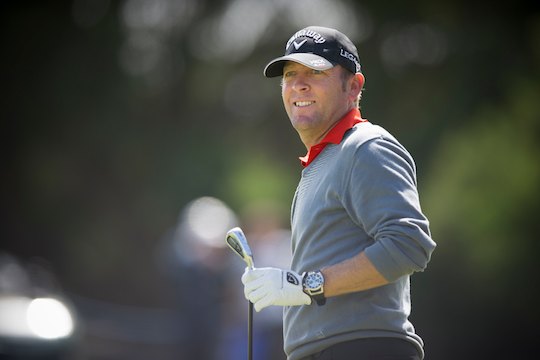 Guyatt, one of the genuine improvers on the Australasian professional circuit and also now a contender on the OneAsia Tour, first turned to golf after he was overlooked for a state cricket team while he was still a young teenager.

Distressed at missing selection the then 14-year-old decided to get serious with his golf as he reasoned it meant his sporting fate was in his own hands.

That was way back in 1990 and Guyatt soon showed his natural sporting talent, going from a beginner to a two marker in less than three years.

He eventually did represent his state, this time at golf and went on to turn professional in 1999.

He qualified for the Australasian Tour at his first attempt but lost his card the following year and failed by just one shot to get his card back for the following season’s events.

So he gave golf away and, in his own words, headed off to earn some money.

He sold gym memberships, worked as an assistant to a chiropractor and even played some professional AFL for a Queensland team.

At that stage his golf was so far down the pecking order that he actually regained his amateur status in 2003.

“I had gone as far as I could at football and I either had to formally start studying chiropracting or go back to golf,” he said.

So Guyatt signed up for the PGA of Australia’s training course and based himself out of the highly-rated Indooroopilly Golf Club.

There he was twice named Trainee of the Year in three years of training.

Guyatt regained his Australian tour card in 2010 and also earned a place on the Japan Tour.

And in his own words, his game has never been better.

“I’m hitting shots now that I could never hit 12 months ago,” he said.

“If I look hard at my game, my putting has let me down recently but, thanks to my coach Kevin Healey, I am now positive about the future,” he said.

And Guyatt is hoping that will lead to a breakthrough win on the OneAsia Tour in the second half of 2013.

And for once, his fate is in his own hands.