Rory McIlroy once praised his then caddie J.P. Fitzgerald for ‘firing him up’ during a British Open…yet that would be the last time the pair worked together.

McIlroy and Fitzgerald parted ways after that event and the man who helped Rory get to No1. in the world then took two years off. 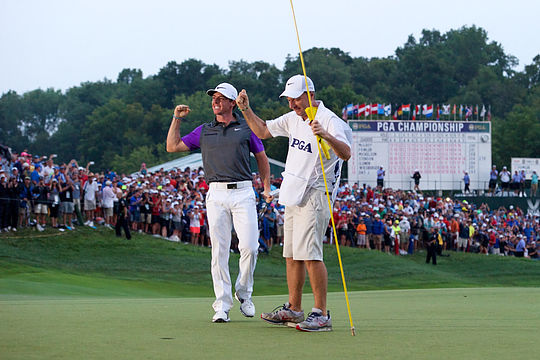 “At the end of the day, I went away to collect my thoughts and recharge my batteries,” Fitzgerald has told the Daily Mail.

“It was obvious that I needed the break. But I’ve learned from every player with whom I’ve worked, and Rory is no different to others, like Ernie Els, in that regard.”

“I’m appreciative of the fact they’ve all helped me to get better as a caddie.”

Amazingly, Fitzgerald and McIlroy have not spoken since, yet the top caddie would not say a bad word about McIlroy – or the time they spent together which saw the Northern Irishman win four majors and ascend to become the No.1 player in the world.

Maybe McIlroy didn’t take the advice given him at the Open Championship quite as well as he suggested.

At the time he was four-over-par after just five holes when Fitzgerald pulled Rory to one side and gave him a bit of a rev-up.

McIlroy regained his composure and went on to finish fourth and acknowledged the value of Fitzgerald’s advice.

“I suggested to him that he might want to try a different driver and three wood, and he disagreed,” said Fitzgerald.

“We just didn’t gel. It happens, and I have no problem with Matt…he’s clearly going to become a great player.”

Fitzgerald has already found another ‘boss’ in Frenchman Victor Perez.

And they must have ‘gelled’, Perez played the golf of his life to win the recent Dunhill Links Championship at the Home Of Golf, St Andrews.