Englishman Justin Rose has been named as this year’s recipient of the Payne Stewart Award presented by Southern Company.

The US Open champion and Olympic gold medallist will be presented with the award at the Payne Stewart Award Ceremony in Atlanta, during the week of the Tour Championship and the final event of the PGA Tour season. 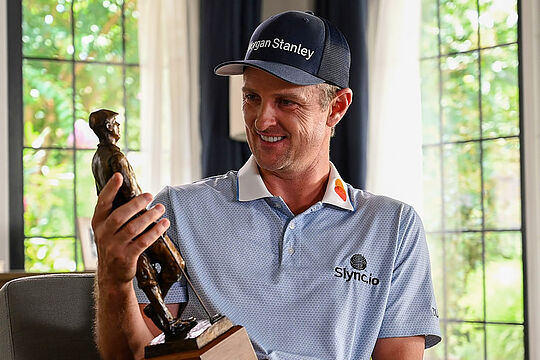 “I am truly humbled and honoured to be associated with the enduring legacy of Payne Stewart through this award,” said Rose.

“The Payne Stewart Award has become an annual celebration of Payne’s impact on the PGA Tour and its players. I am forever grateful to be connected to a man who was the consummate professional on and off the golf course and will cherish being a Payne Stewart Award recipient well after my playing days are over.”

While Justin Rose never got to know Payne Stewart personally their paths crossed several times over the years, beginning as a golf-mad 12-year-old at the 1993 Open Championship.

“As a young boy he actually threw me a golf ball at an Open Championship I think way back in 1993, so that was a cool moment and made my day,” remembered Rose.

“Then at the Open Championship in ’98, I was just hitting balls on the range and Payne was just one of the guys who stopped by. I just remember — I can’t remember exactly what he said, but he watched me hit two or three balls and said, “Oh, that’s how it’s done,” like a cool comment, just something that showed his charisma really, I suppose.”

It was only a year later during the week of the 1999 Tour Championship that tragedy struck the three-time major winning Payne Stewart. The private plane in which he was travelling lost cabin pressure and eventually crashed after running out of fuel killing all six on board.

In 2000, the PGA Tour launched the Payne Stewart Award, and the Southern Company, a major gas and electricity company headquartered in Georgia, has supported the annual presentation since its inception. Byron Nelson, Jack Nicklaus, and Arnold Palmer were all honoured at the inaugural presentation.

“Like Payne, he has been one of the premier players of his generation while using his platform to better the lives of those around him.”

“The inspiring progress that he and Kate have made through their family’s foundation is a terrific representation of how Payne chose to focus his efforts away from the golf course, by giving back and treating people the right way.”