Just when you thought the big fellow could never be moved, it’s happened…American Dustin Johnson is no longer the No. 1 player in the world. 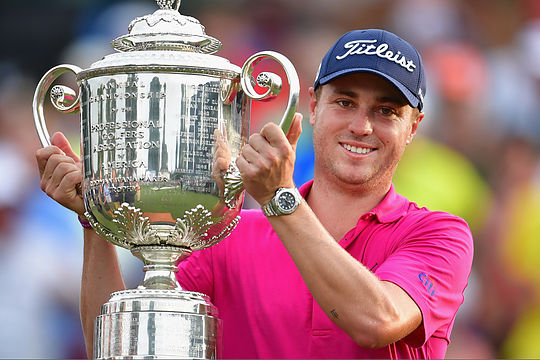 Johnson had his chance to retain top spot but needed to finish at the very worst in a tie for fifth…he finished T17th and has now slipped to second place in the official world rankings.

Thomas, 25, becomes the fourth-youngest player to hold the top spot in the ranking and the 21st overall since they began in 1986.

Of course Thomas had mounted that challenge to the top spot with a five-win year in 2017.

He dropped back a spot at the beginning of 2018, but a victory at The Honda Classic in late February earlier this year followed by a runner-up finish at the WGC-Mexico Championship moved him to second…and ready to pounce.

“I’m very proud to have gotten there, but it means more to me how long I can hold it,” said Thomas in a text message while flying home to south Florida for a two-week break.

“[I] have to continue to work hard with how well so many guys are playing.”

“I would much rather shoot 10-under on the weekend and earn it as opposed to missing the cut and have DJ not play well.”

“DJ’s a hell of a player. If he’s not playing well, he’s kind of like me this week. He’s hanging around, he’ll back-door a top 10 or just play his way into a good finish.”

Incredibly, Johnson has held the No.1 spot for 64 consecutive weeks, which puts him in 5th place on the overall world golf rankings since their inception in 1986.

Johnson’s stay at No. 1 was the longest by any players since Tiger Woods was at the top for five years with his reign ending in 2010.

Rory McIlroy, Jordan Spieth and Jason Day didn’t last more than two weeks at No. 1 the first time they got there.