For more than a decade Brad Kennedy has plied his trade on the Japan Tour and it may surprise people the now 47-year-old has won 15-times in his career with three of those titles in Japan; most recently at the 2018 Shigeo Nagashima Invitational Sega Sammy Cup.

I guess it’s fair to say this quietly-spoken Queenslander has gone about his golf without fanfare, which is in stark contrast to his Aussie compatriots competing on the PGA Tour or the DP World Tour. 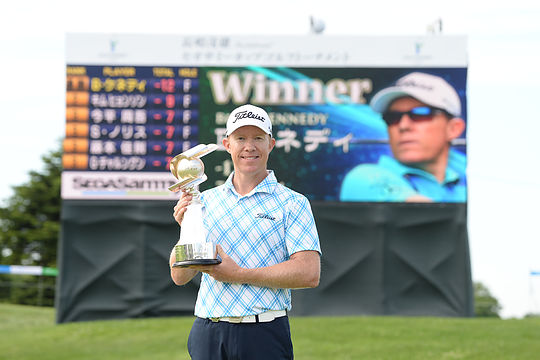 That’s why it was great to catch up with Kennedy at last week’s Saudi International in his first showing at the now flagship Asian Tour event.

This year marks 28-years since Kennedy turned professional and also some 25-years since he first began competing on the Australian Tour. He is also a 22nd-year veteran of the Asian Tour and 12 years in Japan.

“I come into a new season still feeling like I am learning a lot while my game is still getting better and better, and the more that I put myself in position”, he said.

“That’s just because I am practicing more and more now while I am training a lot differently. So, I am not just focussed on practice…I am doing all sorts of stuff.”

“I’m turning 48 this year but it’s still nice to be out here, and playing in these big events like the Saudi International at the age I am now. You never know when your opportunities will cease, so I am just trying to stay positive in terms of the starts I’ve got.”

The worldwide COVID pandemic not only saw a 21-month disruption for the Asian Tour but the Japan Tour was badly affected as well with foreign players being locked out of Japan.

“The pandemic was an issue for us getting to Japan last year, and also getting about while it just felt very different last year as you couldn’t do what you were normally use to, like going out for dinner and always being mindful of where you were you went or what you did.”

“The first part of the season last year, we had not been vaccinated and then after being vaccinated knowing that if you tested positive you were sidelined for two weeks.”

“It was a very daunting experience knowing how I have travelled back-and-forward from Australia to Japan but then be faced with lockdowns and so on.”

“Then you start spending too much time at the golf course or you’re at the hotel that, more than often are very small, so you found yourself with too much time on your hands trying to kill time.”

Following a 14th place in the Saudi Kingdom, Kennedy will return to Australia this week for Thursday’s starting Vic Open, and remarkably where the top three place-getters will earn a place into July’s 150th Open Championship.

“The Vic Open is going to be exciting to be travelling to and three spots into The Open only adds a new dimension to the event,” he said.

“I’ll play a couple of other events back home and then head back to Japan. Even though it is nearly 30-years since I turned pro, I am still excited as ever heading into a new season, and also heading back to Japan.”

“I still have a few boxes I wish to tick on the Japan Tour before I finish-up, and also improve my World Ranking (Currently World No. 282 as at February 1st).”

Kennedy and his family lived in Japan until 2015 when they sold their house and now reside at Hope Island on the Gold Coast with his two daughters aged 10 and 15.

“It’s extra special for me being able to now travel home and see the girls as they are growing up fast, and that’s another reason why I want to pull back a little bit on my playing schedule to watch them develop.”

“My golf has always been important to me but not that important”.