The selection criteria had to be tweaked for 2021 but the recipients of the Karrie Webb Scholarship are as outstanding as ever.

New South Wales’ Grace Kim and WA’s Kirsten Rudgeley have been named the lucky players for this year’s award following in the footsteps of some our biggest names including major winner, Hannah Green and 5-time LPGA winner, Minjee Lee – both from Western Australia. 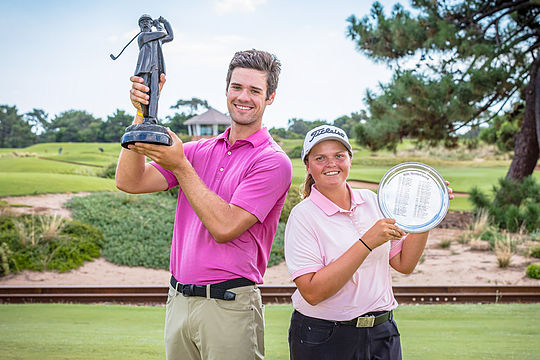 Since its debut in 2008, previous winners have been culled from the Karrie Webb Series Order of Merit, however, with COVID-19 effecting the local tournament schedule, the decision this year was made directly between Karrie Webb and Golf Australia.

“After a challenging year, I’m really happy that the series was able to be contested, albeit that it was harder for the girls to play in all the events they would have liked,” said Webb.

“It’s a credit to GA and all the state bodies that any of these events were able to go ahead at all.”

“Grace Kim is now the first four-time recipient, which shows how consistently well she has played over the past four years, capping that off with the Australian Amateur win this year.”

“Kirsten Rudgeley is a first-time recipient this year and from all accounts played the most consistently good golf over the events she was able to play. I have heard a lot of great things about Kirsten’s game and look forward to meeting her very soon.”

Kim, who at 20-years-old and our top-ranked women’s amateur, has won nearly every major local title available including two Australian Amateur wins, two NSW Amateurs and even a gold medal at the Youth Olympics.

“I’m so thrilled to receive this scholarship again,” said Kim, who is playing at the Augusta National Women’s Amateur in the US this week.

“I can’t thank Karrie enough and acknowledge her generosity enough. Honestly, she inspires me more every year to succeed as she has and to give back as she continually does. She is the idol of so many female golfers, myself included.”

Kirsten Rudgeley looks set for a similar rise to fame as her fellow Western Australians on the LPGA Tour. The 20-year-old has several wins under her belt include multiple WA Amateurs and the 2020 Victorian Amateur. This year she has three runner-up placings, two of those were behind Grace Kim, and a win at the recent South Australian Amateur Classic.

“I was so shocked to receive this scholarship because I know how prestigious it is,” said Rudgeley.

“This scholarship means the world to me. It will allow me to travel internationally to play events and most importantly to meet Karrie for the first time. I feel like all the hard work and time I’ve spent on and off the course has finally paid off, not only for my myself but for my family.”

Due to COVID-19 restrictions in 2020, the scholarship winners (Gabi Ruffels and Grace Kim) met with Karrie Webb at her home in Florida along with an LPGA tournament visit.