It does seem a rather obscene punishment for one quick gesture.

Yet the Korean Professional Golfers Association obviously see things differently and have suspended promising South Korean golfer Bio Kim for three years for sticking his middle finger up at a crowd after the noise of a mobile phone camera affected his shot on the 16th hole of the recent DGB Financial Group Volvik Daegu Gyeongbuk Open. 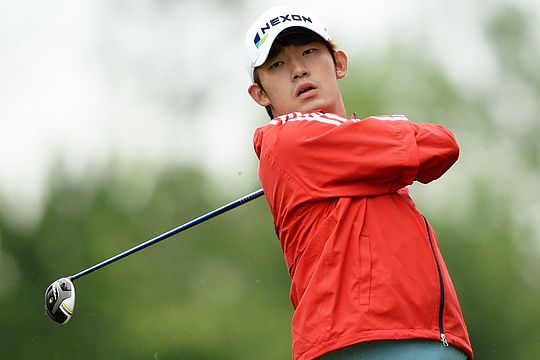 While the 29-year-old did go on to win the tournament he has since indicated he will not appeal the three-year ban or the 10million won ($A12,500) fine that he copped for doing it in the first place.

Kim later apologised for the gesture, after he became the first two-time winner on the tour this year.

Kim later dropped to his knees in front of a television cameras and fought back tears as he apologised again after attending an emergency KPGA meeting over his action.

But the KPGA later said it had reached a unanimous decision to suspend the golfer for three years from the Korean tour.

“He damaged the dignity of a golfer with etiquette violation and inappropriate behaviour,” said the Tour’s statement.

Kim led the tour in money and Player of the Year points, but the suspension meant he would not be able to finish the season.

Kim, who has six professional wins to his name, played on the US PGA Tour in 2011 after earning his place via Q-School. He also had two seasons on the second-tier Web.com Tour.