Sydney’s Graham Blizard has burst onto the National Seniors scene, winning three from four events in the past three months.

The recently turned 55-year-old said he was not familiar with the senior events till his mates told him about it. 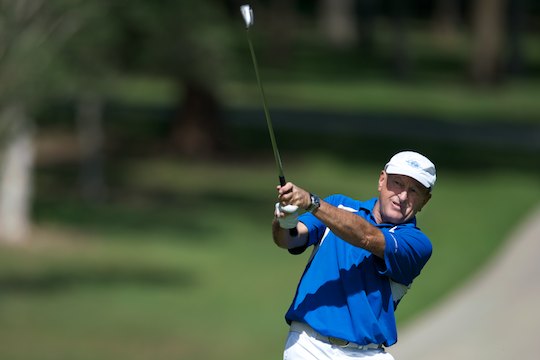 “I didn’t have a clue about this sort of stuff three months ago,” he said. “I didn’t even know it existed.”

But it hasn’t taken the Twin Creeks member long to settle in, claiming one of the biggest tournaments, The National Seniors Masters in what was a class field of 171 competitors.

Blizard secured his first green jacket after firing rounds of 72, 78 and 72 at the Mornington Peninsula’s National Golf Club in Victoria. But don’t ask him if he was happy with his efforts.

“You would have to know me well for me to answer that,” he laughed.

“I am very critical of myself when I play these things but I guess you can say I didn’t play too badly,” he said.

“I hit the ball really well but I didn’t score well for what I would consider scoring well. If I had had two or three better each round I would have been happy.”

“But in the light of having to get the job done I was pretty happy with the scores I had because they are pretty tough golf courses.”

Blizard was previously a member of NSW Golf Club and said his familiarity with playing in windy, links style conditions helped him down at the National Golf Club.

“The conditions are normally quite nasty at NSW on a day to day basis so I am used to wind.”

“There was one day out there where I wouldn’t consider to be a terrible wind but others may have.”

“NSW is quite a tough golf course it is quite hilly and a good test of golf and those courses down there are somewhat similar. It is more like a game of chess rather than just hitting a golf ball.”

Blizard said his driving off the tee was what set up the victory.

“I was 40 or 50 metres ahead of most of the guys and that makes a huge difference. I could fly over a lot of the bunkers and trouble and it makes the holes a lot more manageable.”

Blizard turned 55 late last year and decided to try his hand at the Senior Amateur scene after some encouragement from his golfing mates. And he should be thanking them for that.

Almost immediately the scratch marker hit a purple patch when in February, he claimed the Men’s NSW Senior Classic by three shots over Greg Stanford from Mona Vale. He then backed up three weeks later to finish runner up to Queensland’s Peter King by one stroke in the NSW Senior Amateur at Lynwood Golf Course.

Just a month later Blizard showed what an outstanding talent he is when he won the Lake Karrinyup Senior Classic in impressive style.

After flying from Sydney, Blizard headed straight to the course having never played it before and fired off a first round three over 75. At one stage he was four under.

In the second round, Blizard shot two under to take the Classic by five shots over the seasoned Queenslander Colin Hallam. After collecting his trophy Blizard headed straight back to the airport.

It was a rushed but successful trip for the New South Welshmen who admits it gave him a taste of Seniors Golf and a position on the national team is now what he is chasing.

“I now know what events to play to get my ranking right up, so now I am only going to try and only play state titles and all the major ones,” he said.

“I will throw a few secondary ones in as well but that is the secret to getting into the National team.”

Blizard appears on track, with his ranking already in the top ten after just a handful of events.

The points system works on a 12-month rolling basis and Blizard is hopeful his good form will help him in to National colours.

“I have decided to go and play all the events I need to play just to see if I can achieve what I want to achieve.”

Golf Australia will select a national team for the Asia Pacific Teams Championship to be played in November at the Discovery Bay Golf Club in Hong Kong.

There will be two teams, Team A, which will comprise the top three ranked players and Team B which will consist of the fourth placed player and two players at the discretion of Golf Australia.

If Blizard doesn’t finish in the top four but continues his rich vein of form, he will be hard to ignore.