Surprisingly, Jason Day is not the first Aussie professional to be struck down with vertigo problems.

And former US Open runner-up Stephen Leaney had just as much difficulty finding ways to combat the dizziness problems similar to those that struck Day down during his Open charge at Chambers Bay a couple of weeks ago. 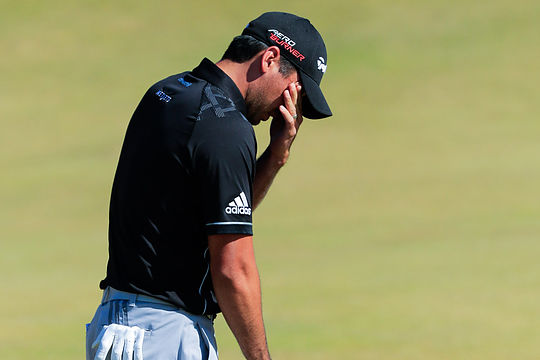 The West Australian actually suggested that medication might not even be the answer after he watched Day stumble and hit the deck when his by vertigo during his second round at the second major of the year.

Leaney was amazed that Day was able to even fight his way through the symptoms and even play the final two rounds in a fighting effort that drew praise from fans all over the world.

“It’s amazing that he could even keep playing,” Leaney said.

“The best way for me to describe it is, it’s like trying to play golf when you’re drunk.

“You can’t ever get yourself in a position where you’re balanced and focussed enough to hit a golf shot.”

“I noticed he was holding his yardage book up high in front of his face to stop himself from looking down.”

“I’m not surprised that he ran out of gas in the end. For starters it’s a US Open, so that’s hard enough.”

“It takes all your focus and concentration just to get around there anyway, but to feel like you’re constantly off balance and to shoot the scores he did, was remarkable.”

Leaney was struck down by an allergy-based vertigo during 2009, which inevitably ended a seven-year stint in the US.

He went on to try CAT scans, MRIs, blood tests and medication trials in an 18-month effort to beat the condition.

In the end he decided to cut dairy and red meat from his diet, after discovering the food groups were major allergy triggers, which, in turn, sparked his vertigo.

Leaney’s condition improved within six weeks of the dietary changes, and he hasn’t suffered the symptoms since.

“The hardest part is to get the diagnosis, because there’s so many different forms of vertigo,” he said.

“Once you find that out, you can start working on fixing it.”

“I doubt the medication would solve the problems for him. He would be on those now and they seem to wear off.”

“Hopefully it doesn’t affect him for too much longer because it’s not fun.”