Leanne Bowditch goes back to college

Although not quitting the game altogether, Queenslander Leanne Bowditch has changed her focus on golf, temporarily trading her clubs for marriage and a return to the university where she studied for four years.

But despite reports to the contrary, the Sunshine Coast junior who is now based in California, has not totally abandoned her professional career. 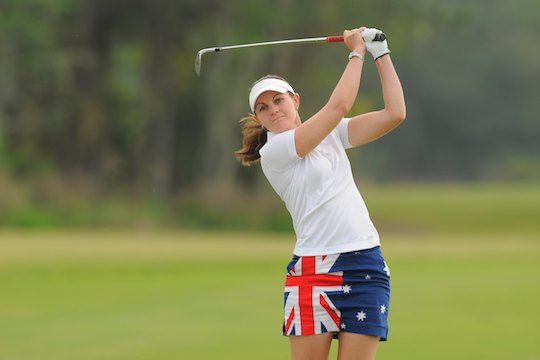 “No, I have not quit professional golf and intend to play in as many events as I can that fit in around my new schedule,” she told Golf Grinder from her US home.

“A recent interview published on the LPGA Futures Tour website portrayed the incorrect decision about my future. I have stopped playing the Futures Tour, full time yes, but they misunderstood my intention in that interview.”

Bowditch’s fresh focus is on her new job at Pepperdine University, which overlooks the Pacific Ocean at Malibu.

She was recently appointed assistant women’s golf coach at Pepperdine, where she was a student from 2004 to 2008.

She became a first team player from her freshman year and in her final year was ranked No.61 nationally and earned bronze honours.

“The opportunity to return to Pepperdine and become the assistant coach was an offer too good to refuse, and one I was honoured to be offered,” she said.

“However, depending on my coaching schedule, I would still like to play in a few tournaments here and there. I am just going to play it by ear.”

Bowditch’s decision to quit the LPGA Futures Tour was made despite her best-ever finish _ a recent tie for second in the $125,000 Tate and Lyle Players Championship at Illinois.

She carded rounds of 71, 67, 71 and 68 to tie for runner-up honours at 11-under, draining a birdie on the final hole at Hickory Point Golf Club.

“It was nice to finish on a really good note,” she said.

“The travelling lifestyle isn’t really for me. I’ve had fun out here, but I like being home and being with my new husband (Mike Craig, whom she married in October).”

Bowditch is the younger sister of PGA Tour member Steven Bowditch and in another good result tied for sixth at the Teva Championship in Mason, Ohio, recently.

But while she may have come close to winning in her two final professional appearances for 2011, the Tewantin-Noosa junior said she was happy to leave the game – for the time being – on a high note.

While at Pepperdine, Bowditch also intends to continue her studies.

In 2008 she graduated from the university with an undergraduate degree of Bachelor of Arts in Integrated Marketing Communication.

“I intend to go back to Pepperdine Graduate School and receive a Masters in Business, and will most likely start that next year,” she said.

Australian women golfers have had great success using Pepperdine as a stepping stone to their professional careers, with fellow Sunshine Beach star Katherine Hull the most successful.

Others who have graduated from Pepperdine include Lindsey Wright, Tammie Durdin, Crystal Fanning, Nicole Montgomery and Misun Cho.