You could almost say the reigning Ladies European Tour number one Lee-Anne Pace is the accidental pro.

The 30-year-old never had those fantasies of strutting the fairways and holding aloft the British Open Trophy. As a young girl, she was too busy swinging a hockey stick, swimming or taking to the tennis court. Golf was just something her dad played. 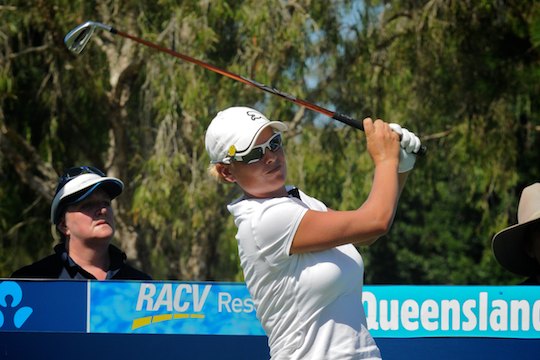 “It is interesting especially because it wasn’t my dream. It became my dream, but I never saw myself being a golfer. I saw myself as a hockey player or a tennis player,” Pace told The Golfer Monthly.

While she was no slouch at hockey, making the South African national squad, Pace decided to pack the hockey stick away and give golf a try when she turned 18.

“I was hitting some balls outside one day when my Dad was in the pub having a drink and there was a pro there and he said ‘who is that girl hitting?’ and my Dad said ‘that is my daughter’,” Pace recalled.

A week later Pace had her first lesson and was then encouraged to continue with golf by her Dad.

“I took a year off just to play golf and I hated it because I was so bored. I had to work in a pro shop and do waitressing and practice golf and I just didn’t want to do it all,” she said.

So then aged 20, Pace quit golf and went to work as a graphic designer for a year until she ran into an old friend who suggested she apply for a golfing scholarship in the United States.

With a handicap of +2 at the time, Pace was a shoe-in and ended up at Murray State University in Kentucky. Even so she says she was only doing it to get a good degree.

“I got there and it was freezing and snowing and I thought: ‘What the hell am I doing here?’” she said.

“I got pneumonia for two weeks, I didn’t leave my room, I didn’t know a soul. I called my Mum crying, I was like; ‘I can’t do this, I want to come home’.”

But fortunately Pace stayed. She was later recruited by Tulsa University and ended up finishing in the top 20 in America in her final year. She also gained her psychology degree. Only then did she finally think golf was her future.

There is no doubt it was a wise decision. In 2010, Pace topped the European Order of Merit in just her third year on tour, holding off no less than Laura Davies to take the honours.

“I think it was really good for my career because we had such a head to head battle, especially towards the end of the year,” she said.

“It was so tight, obviously to be up against a figure like Laura is massive and to be successful, it is also bigger.”

“I think golfing wise it has helped me a lot because I had to step it up. I had to play better so I did it.”

In 2011 Pace is looking to improve her world ranking to somewhere around the top 30 and then head to the holy grail of women’s golf, the US LPGA.

“People say how come you bloomed so late and I say well it’s not really late, my career only started now because I only turned pro like yesterday,” she laughed.

“I am glad that I did that way because if I had started when I was younger I would have been bored – golf’s pretty slow you know.”