Like her golf game, Minjee Lee just quietly gets on with business.

And that has seen the West Australian professional rise as high as No. 5 in the world of women’s professional golf this year. 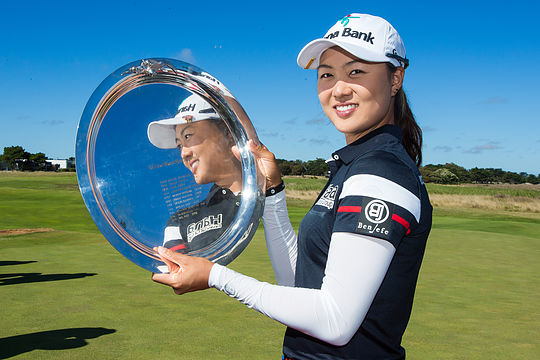 A win and a sprinkling of top 10 finishes made Lee Australia’s best-performing golfer on the world stage this year.

It also made her the first woman to win the prestigious honour of the Greg Norman Medal, awarded on the eve of the Australian PGA Championship at RACV Royal Pines Resort on the Gold Coast.

Jason Day and Mark Leishman were the two most-recent winners of the award, which puts Lee in illustrious company.

“We have seen the emergence of some great young players, making their name in the US and Europe, and seen many of our established players continue their successful careers,” said the Great White Shark.

“Yet one nominee for the Greg Norman Medal this year stood out above the rest.”

“Two tournament wins, one in Australia at the Vic Open, and one on the LPGA tour at the Volvik Championship, outstanding performances in all major championship events, and a fifth place standing on the Race to CME Globe, saw her ranking moved from 19th to fifth in the world.”

Lee accepted the award with her typical grace:

“I’m humbled to have won such a prestigious award alongside two amazing golfers already in Marc and Jason,” she said.

“It’s a great honour, Greg is arguably one of the greatest golfers to ever come out of Australia so to win an award attached to his name is really special.”

“I’ve had a great 2018 season and this is a really nice way to be acknowledged for that, thanks to my team for their hard work throughout the year, hopefully we can have a bigger and better one next year.”