The easiest hole on the Port Fairy course proved too much for one of Australia’s best golfers last week.

Marc Leishman, ranked the 56th best player in the world played in the mid-week competition at the marvellous Port Fairy layout in Victoria and it was index No 18, the 278m 13th hole that ruined what would have been a pretty handy card for this seasoned professional, who had to play off plus seven around the par 72 layout. 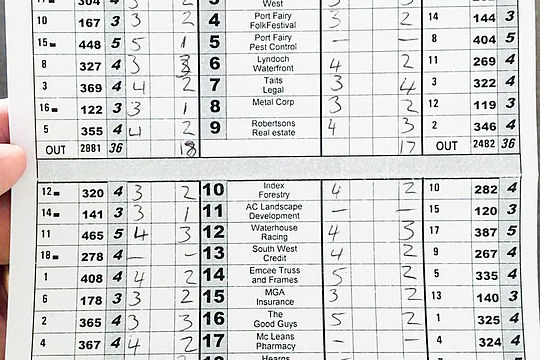 Leishman reached the turn in four-under par and “perfectly poised” on 18 stableford points, although two of his birdies were only worth two points each because, from that handicap, he was forced to “add one shot” on those easier holes.

He then birdied 10 and 12 before wiping the par-four 13th before more birdies at the 16th and 18th to finish with 36 stableford points (eight birdies in all) which, we are reliably informed, would win him a ball in the Port Fairy comp.

Just what the Warrnambool pro would no doubt require as he headed off to attack the US Tour in 2017…a new golf ball in his bag.

Leishman had been spending time in his hometown of Warrnambool with family and friends and was lured for a ‘hit’ at Port Fairy before heading off to play on the toughest tour in the world.