After a year off thanks to hip surgery, Sydney’s Rachel Bailey was itching to test her game against the very best on the Ladies European Tour.

Despite missing the cut on the weekend in her first start on the European Tour at the Lalla Meryem Cup in Morocco, she is still hopeful that the long recovery from injury will be worth the wait. 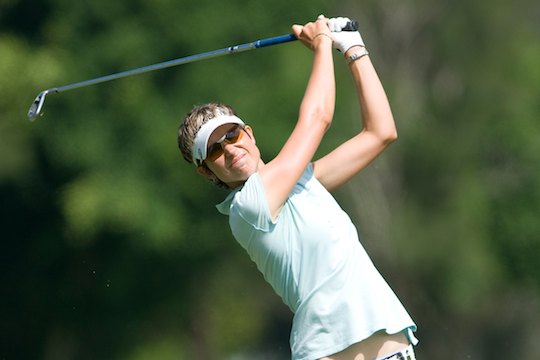 “My goals are to get back into tournament mode and seeing how I am performing and gauging realistically where I am at.”

After playing so well in Spain to earn her card for the Ladies European Tour in early 2011, Bailey received the devastating news that her hip required immediate surgery.

There would be no golf tour in 2011 for the 31-year-old but typically Bailey looked on the bright side.

“I think it happened for a reason. I was mentally tired when I came home from Spain,” she said.

“I didn’t know exactly what was going on but I think just having that injury occur, means now I am physically better and mentally I am in a better place.”

“Now I know I want to play. I am really excited to get out there you never know how you are going to come out of a year off. Mentally, I came out way more excited.”

Bailey had played most of 2010 in constant pain, her hip so sore that often she found walking difficult and sleep hard to come by.

“I was waking up in pain, sleeping was difficult, even getting in and out of a car, or walking, it didn’t matter what I was doing. It hurt.”

While the MRI revealed the torn ligament, it wasn’t until doctors went in to clean up her hip that the real culprit was discovered. A one-centimetre piece of bone that was floating inside her ligament.

“That was what had been causing all the pain but it didn’t show up in any of the scans that I had, so that was a shock,” she said.

After surgery in July, Bailey then started the torturous process of rehabilitation. Six weeks after the operation Bailey took to the putting green and it would take another four months before the driver came out of the bag.

“It has been a long, long process and a long year,” she said.

But it was also a difficult time because throughout her rehabilitation, Bailey was unsure if she would receive a medical exemption from the Ladies European Tour. If she did not receive one, she would be required to head back to qualifying school.

“Fortunately I got my medical exemption. I couldn’t apply for it until the end of the season so I had to go through everything not knowing if I was going to get it or not. That was hard.”

Bailey admits she is grateful for the time off, as it has given her time to reflect on her technique and change a few things.

“I have gone through a really good process. I have started from scratch on my game, and I have built it up,” she said.

“I now need to just keep building on that and the results will come through a good solid process.”

With all her injury woes behind her, Bailey is adopting a realistic approach to her season ahead.

“It is not a year that I am going to have goals of top tens, top fives, it is a year of how am I doing, just to get back into the swing of playing,” she said.

“But of course me being me, I have high expectations. I want to win but I just need to take it easy, realise what I have been through, how I come out the other side and keep that momentum going.”