Lincoln Tighe gets the Gong

A strapping 22-year-old with the build and power of a young Ernie Els has taken the leap to the professional ranks after an impressive amateur career.

After achieving a career goal by being named captain of the NSW senior team for the 2011 interstate series, Wollongong-born Lincoln Tighe has set his sights on the US PGA Tour. 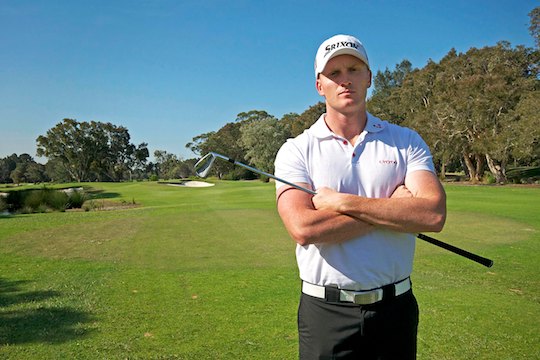 And he has started his quest to achieve that goal where it all began … debuting at home in November at the NSW PGA Championship at the salty links of the Wollongong Golf Club.

“I wanted to turn pro at that time after the interstate series, having played for NSW for a few years, captaining the team this year and playing for Australia in the past,” he said.

“To be named captain this year, it’s what I always wanted. Being captain and having the responsibility is what I like.”

“I was fortunate to get a sponsor’s exemption into the NSW PGA. Being able to turn pro at home in Wollongong was a good fit and it was at a perfect time for me.”

Torrential rain resulted in the Port Kembla Golf Club product having to wait an extra 24 hours to make his debut in front of family and friends, with the first round being cancelled and the tournament reduced to 54 holes.

When Tighe finally arrived at the tee, he performed extremely well to post a 3 under par 67 in the first round.

“I was pretty nervous on the first hole but I handled it (the debut round) pretty well. I just tried to build my round and I had three birdies in the last four holes and shot 3 under,” he said.

Tragedy was to strike when a late double bogey cruelled his chances of a first professional pay cheque, missing the cut by a shot in a strong field.

Two weeks later, Tighe missed the cut again at the NSW Open at Newcastle Golf Club but he is excited by the experience and encouraged by how his game stacks up against the professionals.

“I felt like I belonged (with the pros) so that was a good feeling. I did put a bit of pressure on myself and I wanted to play well in front of all the people who came to see me at Wollongong,” he said.

“I always wanted to turn pro young but I wanted to be ready. In saying that, I’d heard from a few other pros who said if you wait till you think you’re ready to turn pro, you never will.”

“They said to set a date and have a crack. I’d rather be learning now how to play as a pro, learn how everything happens, the travel and so forth, while I’m young than when I’m 26 or 27. I’d rather be peaking then.”

Rather than being disappointed in not making the weekend in his opening events, Tighe is looking forward with great anticipation to the next challenges.

“I’ve been excited to get out and practice, I know I’m close to something good. I’m going down to the pre-qualifying for the JbWere Masters in December and have been given an exemption into the final stage of the Australasia and One Asia Tour School, so it should give me some status for next year,” he said.

“I can’t wait to get to America next year, that’s where I want to play. From what I’ve been told it should suit my game, hitting it high and long, target golf and all that sort of stuff.

“I’d like to go over and experience the US scene, play some of the Hooters Tour events and hopefully make a bit of money.”

As you’d expect, Tighe’s father Darryl, a well known Illawarra jeweller, and mother Katrina were responsible for his start in the game at the age of six.

“I started to play so I could spend more time with Dad. He’s been a good golfer and was a good tennis player. I had a crack at tennis too,” he said.

“I was playing both till I was 12 but I gave tennis away and started playing the Jack Newton Junior Golf Foundation events.”

“Dad has been unbelievable. He’s spent so much money and he cares so much, he just wants the best for me and supports me in whatever I want to do.”

Aside from his parents and long-term coach Glen Whittle, Tighe is extremely grateful for the support of a number of corporate backers in his camp and is hoping to repay them for their faith and support.

“Srixon has been a great supporter for a while now, Lioto Golf Apparel looks after me with my clothing and I’ve just starting working with Illawarra Children Services in Wollongong,” he said.

“They’re (ICS) great to me, helping me out financially and they have a job for me whenever I want it. For them to want to help me out in the early stages of my career is unbelievable.

“I’m going to start introducing kids to golf through their After-School Care Programs and mentor some of the kids, which is like a dream for me.

“I wish I had someone my age mentor or even talk to me when I was playing golf at 12 or 13. I remember seeing some of the guys who were 17 in the Jack Newton events walk by and it was like they were Tiger Woods!

“Being in that position now is great and I’d like to help the young kids out with whatever they need, to point them in the right direction if they want some help or to get started in golf.”

The Illawarra region has been blessed with many great sportsmen and women over the years and is regarded as a great breeding ground for rugby league talent in particular.

Golfers born and bred in the Gong who have gone on to successful amateur and professional careers, however, are proportionately fewer, although a number of outstanding players have links to the region after having moved there at a young age.

Most notable of these have been Steve Elkington and his older brother Robert, who moved to the area from Wagga and also played out of the Port Kembla Golf Club.

Likewise, Brad McIntosh moved to the area with his family, won the Wollongong Club Championship at age 13, played collegiate golf in the US and is the only player to shoot a 59 in Australian professional golf.

Tighe, however, is the most accomplished born and bred local to hit the professional ranks.

“I’d like to get in a few events, make a couple of cuts to settle the nerves and get me going. I haven’t huge expectations, I just want to get out and learn,” he said.

“I’ve looked up to Ernie Els all my life (as a role model). I’ve never seen him get angry on the golf course, he always seems so smooth and being the same sort of size physically, it’s easy to role model my game on his.”

Judging by the support he received in his debut, the City of Wollongong and Illawarra region will be following Tighe’s every footstep as he looks to join Els on the PGA Tour sooner rather than later.