Love III, who led the USA to victory over the Darren Clarke captained European Team at the 2016 Ryder Cup at Hazeltine, went onto his Twitter account to say he and his wife were safe. 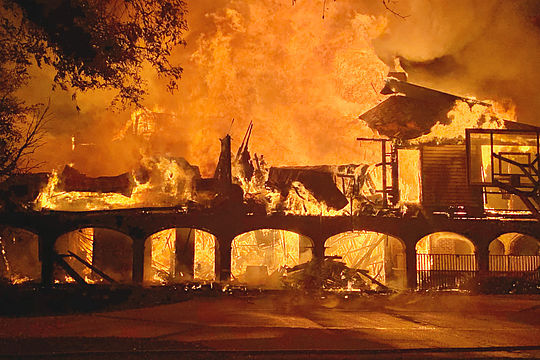 Glynn County fire chief R.K. Jordan said there were no injuries to the 16 firefighters from multiple units who responded to the blaze.

Jordan said the first call to the dispatch center came at 5:18 a.m., and the first truck arrived on the scene at 5:23 a.m. to find the home fully engulfed. Eventually, three engines, a tanker truck and three rescue vehicles responded.

“It was gone upon our arrival,” Jordan said of the second-alarm fire in an article in the Augusta Chronicle.

“While everyone in our family is saddened at the loss of our home that was filled with so much laughter and incredible memories, we’re very blessed that everyone is safe and unharmed,” tweeted Love to his 200k followers.

“We’re very thankful to the first resoonders who made a valiant effort to save our home, and we’re keeping things in perspective as people across our community and around the world are struggling with the current unprecedented health crisis.”

Jordan said the operation was nearly completed by 7:30am, with only a few hot spots to put out. He said the fire marshal has begun his investigation.

“It’s very easy to tell where a fire originated but sometimes difficult to tell what started it,” he said.

Jordan said the firefighting community was saddened by the incident.

“Davis Love has been wonderful to our fire department in the past,” he said. “He’s supported us very well, brought us food when we were dealing with hurricanes, things like that. So this hits us very hard.”

Love captured his only Major at the 1997 PGA Championship while he also won The Players Championship in 1992 and 2003. He is a five-time winner of the now RBC Heritage having claimed his first Tour title in winning at Hilton Head in 1987 and his fifth in 2003. His last Tour win was at the 2015 Wyndham Championship.