Of all the impressive performances by our golfers over the weekend, the best was from a bloke lying on his couch at home in the Bahamas.

That’s tongue in cheek of course, because Adam Scott’s rise to world number one is ultimately the result of hard work and dedication. 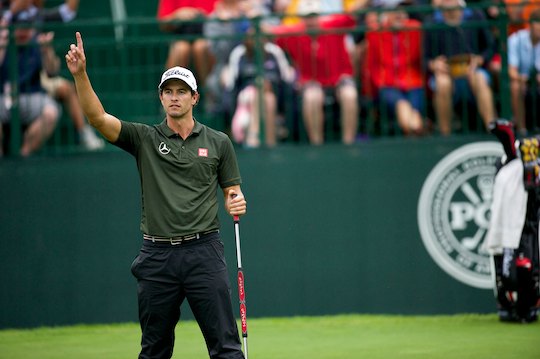 While it would have been ‘nice’ for Scott to have won at Bay Hill back in March to usurp Tiger Woods at the top or take the other two opportunities he had, it does not diminish the moment that has been 14 years in the making.

A career is built over time and this is another of his life goals, which can be ticked off the list.

It’s been 16 years and 4 months or 5,971 days since an Australian stood atop the Official World Golf Rankings. Greg Norman’s last week of an astonishing 331 at the summit came in early January 1998, so Scott’s achievement, as Ron Burgundy would say, “is kind of a big deal.”

He’s just the 17th to hold the position since the OWGR began.

Despite winning 26 times since turning pro in 2000, including a major, WGC, The Players, 19 PGA and European Tour titles plus all the Aussie ‘majors’.

Consistency has been his key to becoming the best and that began a few years ago.

Scott’s close call at the Masters in 2011 was the point where he knew the work he was doing under the guidance of coach and brother-in-law Brad Malone had him on the right path.

Until then, the gifted Australian was using his talent to deliver a mixture of brilliance and mediocrity.

Over the next three years, they have shaped Scott’s game to be the ‘majors machine’ it has become, while picking up various tour wins along the way.

It has been this method and not one of sheer domination like Woods that enabled him to realise a boyhood dream.

While people will say he did it when Tiger was out injured, it’s been obvious the Queenslander has bettered the 14-time major winner in the big events during this stretch.

Performing the best amongst the best is the clearest way to determine who is number one. In contrast, Woods has been out of sorts in the majors.

The OWGR works on a two year rolling nature with the last 12 months worth more than the previous year.

In that time, Scott has picked up five wins, five top 3s and another five top 10s worldwide and many of those are the bigger events.

Further to that, he has not missed a cut in 34 PGA Tour events (the longest active streak) and the other 12 he’s played outside the US in that period.

In this case the outcome is richly deserved, congratulations Adam Scott – new world number one.

As Adam gets set to bask in the glory when he plays the Colonial in Fort Worth, Texas this week, I wanted to tip the hat to a number of Australian’s who have done themselves proud over the weekend.

Marcus Both, less than a year removed from wanting to quit the game claimed his third Asian Tour title, used a sponsor’s invitation to win the Philippine Open. The victory gives him a full card and gets him back on the path to greater success.

Exciting NSW rookie Brett Drewitt survived a three-way playoff on the PGA Tour of China, to notch his first win as a professional.

The top five on that tour at years end are exempt onto the Web.Com Tour so he’s in a good position to take the step.

Finally, Richard Green and Sarah Jane Smith tied 2nd on their respective tours. In Europe, Green lost a 3-man playoff to local hero Miguel Angel Jimenez at the Spanish Open, while Smith’s runner-up was her best result in five seasons on the LPGA Tour.