Ok, I’ll admit it… I love the Web.com Tour. Not just because of the caliber of players on it these days, but for what it represents – Audaces Fortuna Iuvat, which is Latin for “fortune favours the brave”.

With the inclusion of the Finals, it’s added some gumption to a Tour that is all about the players trying to change their fortune. It’s rarely about the money, although that helps… it’s more about opportunities and how brave you are to take them. 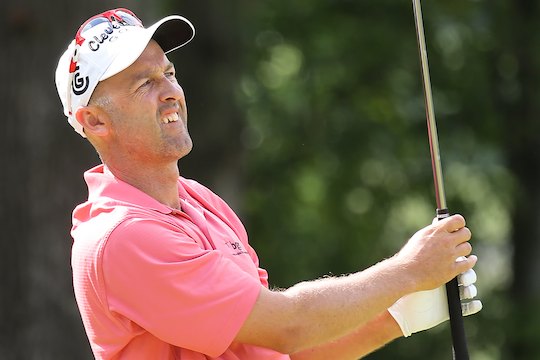 They all work hard as each other and desire to be one of the graduates at year’s end, but only 50 can. With the addition of college stars, it has become the most competitive tour in golf and comes down to a handful of moments in a season – can you define it, or will you let it define you?

Sadly, for the Australia’s near 20-strong contingent only one was able to secure a PGA Tour card this year, Cameron Percy. It’ll be the 40 year-old’s third trip back to the big time and he is excited about having another crack – it could be his last.

The Victorian locked up his card by virtue of his win at the Price Cutter Charity Championship in early August, which in itself was a massive breakthrough. But the father of three is over the long, lonely weeks on the road without his family.

“Someone to have dinner with and talk to or go to the movies instead of sitting in a motel room by myself at night on the computer.” said Percy. “Long nights looking at Facebook or Twitter, gets old pretty quick.”

Based in Raleigh, North Carolina, Percy heads off on the road for weeks at a time without wife Katie who usually stays home to look after their three boys. With the PGA Tour’s incredible support structure for families – Liam 8, Ashton 6 and Tyler 3 will get to see their Dad more often.

“It’s awesome the way the Tour looks after families.” he added.

The rest though are left to deal with the reality, this was not their time. That the thousands of hours of hard yakka didn’t quite bear the fruit they had hoped.

James Nitties, who had a chance to snatch his card in the final week, posted on Twitter “The run is over… Just didn’t have it down the stretch mentally. I’ll get my card back in 2016!”

Like most of the Aussie contingent, Nitties knows how good the PGA Tour life can be. With the exception of Greg Chalmers, who’ll get 8-10 starts by virtue of his 126-150 finish, all of them have to start setting their minds to doing it all over again.

In time they’ll have to accept being outplayed by those just a little more desperate than they were. It gives Eminem’s song “Lose Yourself” extra credence… “If you had one shot, one opportunity to seize everything you ever wanted… would you capture it, or just let it slip?”

Congratulations to Cam Percy and the other 49 graduates who this time managed to capture it.