Luke Elvy: Out of the Shadow For Woods

Seeing Tiger Woods’ niece Cheyenne Woods win the Ladies Masters on the weekend was, on the surface, entertaining. Here was a talented young golfer holding off an even younger and dare I say it, more talented amateur Minjee Lee for her first big triumph.

It’s what tournament promoter’s hope for, and Bob Tuohy has been at it so long he deserves free kicks like this one. Upon reflection though, Woods’ victory at Royal Pines was significant on a number of levels. 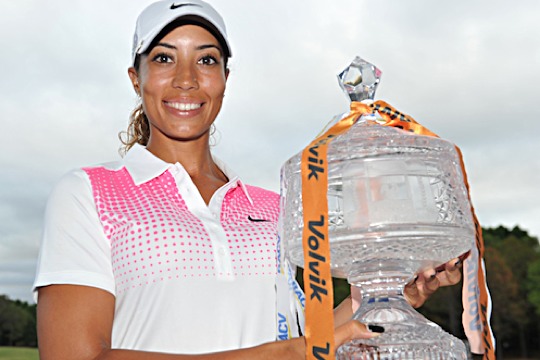 1. Cheyenne Shines In The Spotlight

Being a relative of one of the all-time greats draws massive attention. As she was marching to victory, Golf Channel in the States made a late decision to show the last two hours live.

The same happened for last year’s Australian Women’s Open when Lydia Ko led. This speaks volumes as Golf Channel is banking on her drawing ratings.

We all know the name Woods moves the needle, but why would the female version be a ratings bonanza?

It’s not like she was a teenage phenom like her Uncle, but such is the convoluted world of Tiger Woods anything connected to him is big news.

2. Cheyenne Soaked Up The Pressure

Media attention these days is often skewed towards celebrity more than talent. Imagine being Tiger’s niece, wife, coach… anything, while it would open doors and garner more attention than usual, the expectations would be immense.

Here’s a young woman trying to close out just her second (and biggest) win in her brief professional career.

It’s not like she’s got a lot of experience in this department, but we witnessed was a confident player claim the ‘W’ much like TW does.

3. Woods Is Her Surname, Not Her Title

Other than being proud, it appears Cheyenne couldn’t give a toss that Tiger is her Uncle. She’s got her own dreams and aspirations in golf and she’s out there trying to live them.

She isn’t exempt on the LPGA Tour so this win gives her status on the Ladies European Tour, which provides another pathway.

4. Cheyenne Is Making A Name For Herself

In a golf sense, to hold strong down the stretch with a gifted 17-year-old two-time Australian Amateur champion Minjee Lee on her tail was impressive and so was the West Australian.

The expectations on both were significant and the handled them like seasoned pros each carding 4-under, 67.

The funny thing is… while this week belonged to a woman called Woods, we might have just seen the unveiling of an even brighter star.

Before I sign off, what about Jimmy Walker. It took the 35-year-old Texan almost a decade and 188 starts to win on the PGA Tour. Now just eight events later he’s a three-time winner!

Only Tiger Woods, Phil Mickelson and David Duval have won three events of their first eight starts in a season. It’s illustrious company and shows you how potent confidence is.

Basically his putting has been the big difference. Courtesy of Strokes Gained Putting, Walker has gone from averaging +O.2 last season to +1.5 now. Times that by four and tell me it doesn’t make a big difference.

He’s just about locked up a Ryder Cup spot for October; he’s inside the top 25 in the world and has made $3.6m – virtually half his career earnings ($7.2m) in this dream stretch. Good luck to him.