When Matteo Manassero captured the recent Castellon Masters, he became the youngest-ever winner on the European Tour. He was more than a year younger than the previous record-holder, Danny Lee.

Bernie McGuire was present in Spain reporting on Manassero’s maiden pro win and as he discovered, this exciting young Italian still has to pass his high school exams. 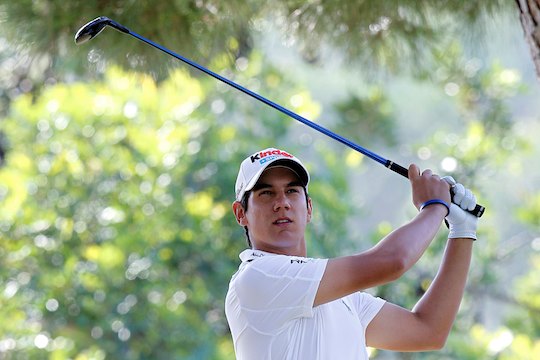 Golfing stallion Matteo Manassero passed his first test as a pro in winning a maiden career victory but the rookie Italian is still has to conquer his high school exams.

The Verona-born Manassero was just 17 and 188 days old in securing the Sergio Garcia-hosted event in only his 10th full event after turning professional in a blaze of publicity last May at the BMW Italian Open in Turin.

‘Manny’, as he is more affectionately known, went to Spain having already wrapped-up his 2011 European Tour card by finishing third in September’s Omega European Masters.

He’d done that on sponsors’ invitations and it was on another invitation that he teed-up on the Club de Campo del Mediterraneo course.

What Manassero did was to further put Italian golf on the world stage, in coming from behind to birdie three holes in succession near the end of his Castellon Masters final round to capture the €333,330 first prize cheque.

Manassero smashed the previous youngest mark by a year and 25 days that was set by New Zealand’s Danny Lee when as an amateur he clinched the 2008 Johnnie Walker Classic at The Vines in Perth.

But unlike Lee who had to decline the prizemoney, Manassero’s windfall meant he had earned more than €600,000 in less than a dozen events.

What a bachelor pad that would buy and there’d be more than enough left over to fill the garage with a couple of Ferraris.

Yet Manassero is literally still attending school and at the time of his success in Spain, he had two months of study and homework ahead of him in order to pass his exams.

He’s already fluent in English and Spanish but it is maths, history and science that Manassero has to get right.

“When I turned pro in May I was still studying at high school but I have had to do it on line and via e-mail,” he said.

“I do have homework but there is no time limit on when I have to do everything. As long as I finish it by the end of the week.”

“I’m doing this through a high school in Turin but I will have to the exams there.”

“But next year I will be playing my first full schedule so I should be okay and not have to undertake so much study then.”

No, this extremely polite and very impressionable young man has been setting records for some time.

Last year, he became the youngest-ever winner of the British Amateur Championship and when he won at Formby, Manassero earned an invitation to compete in this year’s US Masters at Augusta National.

He also earned a start in the 2009 British Open at Turnberry and received one of the loudest cheers all week in becoming the youngest winner of the Silver Medal in being the low amateur in the championship.

Manassero was the youngest winner since the award was introduced 60 years ago.

Despite enjoying little luck with the putter, Manassero fired a last-day 69 to finish in a tie for 12th.

But seeing Manassero alongside Watson was like the ‘oldest and youngest show’. Indeed, Watson had remarked earlier that week: “Golf is a game for life, you are never too young to start and never too old to play.”

Imagine then Manassero’s pleasure when he found himself grouped with Watson for the opening two days of this year’s British Open at St. Andrews.

And Manassero was there alongside the five-times British Open when, at near 9pm on a bleak and cold Friday night, Watson said his ‘goodbye’ to golf’s oldest Major.

“I grew up a little bit playing with Tom Watson and you just learn so much from watching what he does and how he plays,” said Manassero.

“I hit the ball very good that week, kept it on the fairway which was important and something I tried to copy from watching Tom all week.

“It was very special for me, and something I will never forget, the farewell he received on the Friday, and it was just amazing how many people remained there late in the day to wish him well.”

Later that year, and on December 30, Manassero moved to the top of the World Amateur Rankings and remained No 1 for 18 weeks until he turned professional.

Then when he teed it up on the third day of the Masters, on April 9, 2010 Manassero, at 16 years and 11 days, became the youngest player since Bobby Cole in 1967 to make the halfway cut at Augusta.

In fact, Manassero was more than two years younger than Cole.

He’s also the second Italian to win on the European Tour with good friend, Edoardo Molinari sending Manassero a confidence-boosting text on the morning of the final round.

“Edoardo said to me in the text that I was completely ready to make this a very important day for my life,” said Manassero.

“He also told me to just to try and enjoy it as much as I could.

“That meant so much to me and to get a text message from such a great golfer as Edoardo, along with him being a good friend, was like a protection for me against failing.

Manassero passed the first test of any pro and that was to secure a first Tour victory.

Now mark this young man down for a Grade A+ career.