Marc Leishman: Flying Under The Radar

UPDATE: Just a week after our interview, Marc has won his first US PGA Tour title at the Travelers Championship. Congratulations, Marc.

A few month’s back Marc Leishman came close to clinching his first PGA Tour win in the Byron Nelson Championship.

Playing in his fourth year on the PGA Tour the Victorian led with two holes remaining in Dallas, Texas but was left to rue a bogey on the par-three 17th. Leishman carded a final round 66 to finish equal third, two shots behind eventual winner Jason Dufner. 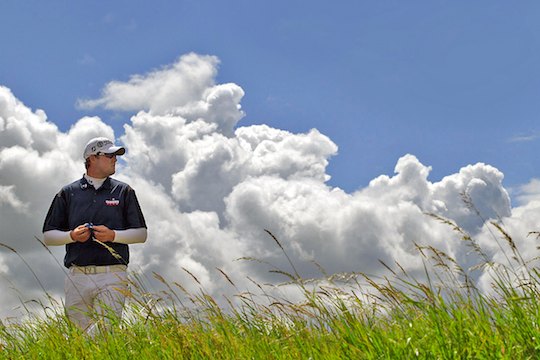 It was Leishman’s first top-five finish on the PGA Tour since the Arnold Palmer Invitational last year where he finished third and his second-best result on tour, having posted a tied-second result in 2010 at the Farmers Insurance Open.

Leishman is open about how the number of near misses on the PGA Tour – not just one but four – has impacted upon his game and himself. In his eyes it is viewed as a ‘work in progress’, something that must occur before a win will actually happen

“It is super competitive on the main tour, everyone focuses upon themselves and believes they can will. I’m learning to putt better under pressure and that’s hard to do when you are under the pump, but I’m getting there.”

“Unless you have been in that situation of having a chance to win a PGA Tour event, you can never be fully prepared to deal with it when the opportunities arise.”

Leishman has always possessed a magical game. A game that combines power off the tee with a touch of class around the green. When his putter is hot, he will score low and that’s where he sees his best chance of winning on the PGA Tour.

“I have alway been streaky with the putter,” says Leishman.

“You look at the times that I have won before and you will see that I have shot rounds in the low 60′s to win an event. That’s because I have holed everything. I did it early in my career at Woolooware and when I won in South Korea. I just have not been able to do it yet in the US.”

The ability to putt under pressure and deal with the situation of being in the breech of winning a tour title are in Leishman’s view the keys to success.

“Pressure putting is not the same unless your in the zone of being in contention,” he says.

“I have putted better this year in the US, yet I still have plenty of work to do in that department before I see a victory coming my way.”

“You just cannot afford to let anything slip on tour as there are so many talented guys up against you and you will get passed by.”

It was in August 2005 that Leishman quietly announced that he would turn professional and at the time not a lot of people took much notice except for those who knew what he was capable of doing on the golf course.

In his first professional event, a pay to play Grey Goose Tour tournament in the US, Leishman finished 3rd and banked his first cheque, US$13,000.00.

With no playing status at the time, it was a bold move to travel to the US, but Leishman has never looked back.

Missing out on an Asian Tour card in 2005 had forced him to reconsider his options. Leishman searched for a tour to play following those earlier achievements on the Von Nida Tour knowing he had the game and he opted for the US.

Yet there was something about his game that separated him from the others in the field during those formative years on the road.

The ability to shoot low numbers and attack both the course and the field and take an event wire-wire made Leishman a formidable opponent.

This is his style of golf and it’s exactly how he won his first two professional tournaments, the 2006 Toyota Southern Classic on the Von Nida Tour and the 2006 Jisan Resort Open on the Korean PGA Tour where he opened with a 61.

He had joined the Von Nida Tour (having finished in the top leading five players from 2005 Australia PGA Tour School), securing victory in the Toyota Southern Classic in March at Woolooware Golf Club in southern Sydney.

It was a victory of seven shots, where he held the lead from the first round after an opening 60. The win spurred on Leishman, convincing him that he’d made the right decision to turn professional eight months before.

Leishman’s amateur achievements reflected a solid platform from which to progress to the professional ranks.

Leishman’s first professional victory in the US was on the Nationwide Tour when he won the 2008 WNB Golf Classic.

“That win really set me up,” says Leishman.

“Until you have won you have no idea how you are going to react when the pressure is on. You learn how your swing will react and how to manage your game in that situation.”

The win on the Nationwide Tour was on the back of a stellar 2008 season, which propelled Leishman to the main tour where he quickly began making a name for himself.

In 2009 Leishman was named PGA Tour Rookie of the year judged by his fellow competitors on the PGA Tour and he became the first Australian to win rookie honours since the award’s inception in 1990.

During the 2009 PGA Tour season Leishman posted three top-10 finishes, including a tied runner-up finish at the BWM Championship in Chicago, and was the lone rookie to qualify for the season ending Tour Championship.

In the process, Leishman collected over US$1.7 million in prize money to finish 47th on the season’s money list.

It was a year of breakthroughs for Leishman. His scoring average of 70.59 had him under the tour’s average of 71.04 and placed the Australian in a tie for 61st.

While Leishman did not win the $US7.5 million BMW Championship back in September, his brilliant second place finish alongside Jim Furyk, eight strokes behind Tiger Woods, was an achievement all the same.

The result set the stage for a solid season ending period and would eventually secure his immediate playing future on the PGA Tour for 2010 and his equal best result on the tour with a tied second at the Farmers Insurance Open in a season where Leishman secured nine top-25 finishes to finish 44th on the FedEx Cup standings with US$1,488,837 in prize money.

“I have certainly changed since my rookie year on the PGA Tour. I’m better at time management, both on an off the course. Early on I was not good at that.”

“I would spend hours out there on the days before a tournament on the range hitting balls, probably burning myself out. Now, I have better preparation and training techniques and I’m more focused.”

In 2011, after what Leishman describes as a ‘patchy’ season, he snuck into the top-100 on the money list for the third consecutive season with just under a US$1,000,000 in prize money with the substantial bulk of the earnings from his tied third finish at the Arnold Palmer Invitational.

“2011 was a season where I just did enough to get it across the line.”

“My chipping and putting at the time was simply not of a higher enough standard to win. The guys on tour are so good in that area and unless you have a strong short game, it is difficult to be competitive.”

This season Leishman already has played fourteen events and being in the money in twelve. He currently stands well inside the top-100 in the FedEx Cup standings and attributes the recent fine run on tour to hard work. Results and that much sought after ‘W’ on the PGA Tour should then follow.

“I am working a lot harder and smarter now than when I first started,” says Leishman.

“I have a great team around me and having recently been married and become a father have been great. Life is pretty good at present and I am enjoying every bit of it. Add a PGA Tour win in there and that also would be nice.”