Matt Griffin is never one to shy away from hard work.

Three professional wins since turning professional after representing Australia at the 2008 Eisenhower Cup is reflective of the 29-year-old’s desire towards betterment. 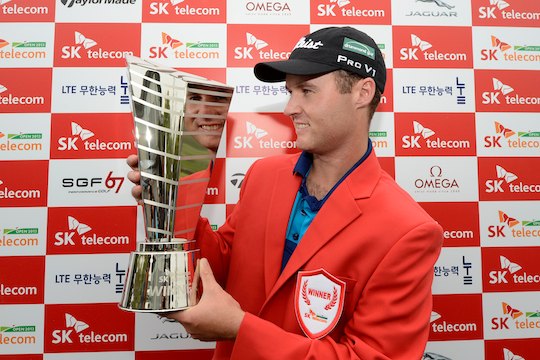 “You can always get better,” says Griffin.

“But what I know now from when I turned pro is amazing. You learn to play and practice smart, otherwise you will go backwards fast.”

Griffin’s game has gone to new levels since winning the 2011 South Pacific Open in New Caledonia with two wins on the OneAsia Tour, the most recent a fortnight ago at the US$900,000 SK Telecom Open in Korea.

“The wins have certainly opened doors,” said Griffin this week from his Melbourne base.

“Twelve months ago I was a little down in the dumps, at the cross roads a bit with my game and had to dig myself out of a hole. Now, I am back enjoying my golf and enjoying the hard yards that goes with it.”

Forging a living in the professional ranks has been an experience for Griffin.

“If you shoot anything over par you won’t last long out there,” he says.

“Everyone on tour is working hard and if you not prepared to put the effort in, you are gone.”

According the Griffin the ‘hard yards’ involves more than just hitting balls on the range.

“The game has turned into such a science.”

“There’s the practice, the mental and the physical aspects you have to work on and continue to develop. If anything, over the last twelve months I’ve learnt to practice with a purpose – some call it practice smart – and it has made a lot of difference to my game.”

A quick look at Griffin’s stats reveals a marked difference in his scrambling stats from twelve months ago and he’s more accurate with the driver.

“My short game is where my biggest improvement has come.”

“Generally before it would let me down under pressure. Now I have the confidence to execute the shot I need and I have cut down the simple errors which in the past had proven costly for me.”

Despite missed opportunities in the US, Griffin has created his own through consistent playing in Asia.

With a number of co-sanctioned European Tour events on his schedule, including the Dunhill Links Championship, there’s no shortage of pathways towards a main tour.

“I’ve got a full schedule towards the end of the year, including some big co-sanctioned events with the Perth International.”

“The next few weeks I will be chilling back in Melbourne and working with my coach Dennis McDade. There are a few little things I need to work on, but overall my game currently is in great shape.”